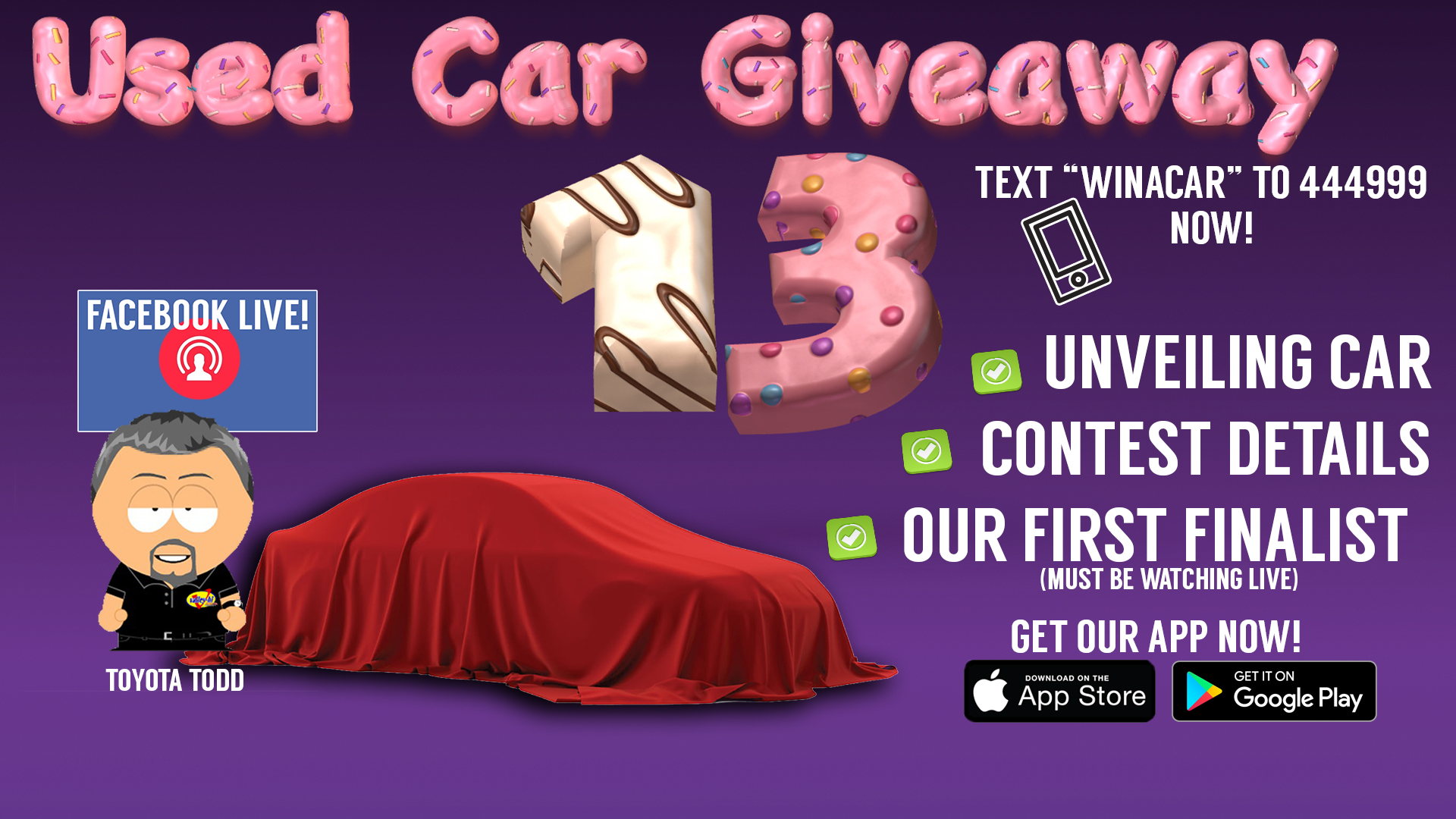 (VVNG.com)- VVNG.com)- Back by popular demand, Valley Hi Toyota sweetens the pot with a major Used Car Giveaway announcement this Friday. The vehicle will mark lucky number 13. Currently, the dealership is under construction of a new building which is starting to take shape. The current location is directly next door at 16444 Valley Center Dr.

“It’s quite a sight to see,” says General Manager Todd Stokes, “the construction of our future building. It’s going to be a great building. In the meantime, we’re working on accommodating our customers at our current location. I told Brian it was time to have another car giveaway as soon as possible. And this time, make it more interactive and more exciting than the last giveaway.”

In April 2016, Stephanie Yanez of Victorville was contestant #40 out of 50 finalists to spin the wheel. She landed on the winning spot which was a Toyota Prius. “So many people got so close- I didn’t even know if I’d get a chance to spin,” said Yanez. Currently, her winning video is being produced showcasing highlights. “I was excited to take part in all of the different ways to become a finalist. I became a social media expert by Facebooking, watching Periscope, tweeting on Twitter, checking emails, and keeping up with Brian and all of the announcements he made.”

Used Car Giveaway #13 promises to be even more engaging and more competitive. A recent survey conducted indicated that contestants had a great time engaging with the dealership with the variety of posts. “Even though I didn’t win, I had so much fun being a participant. It really keeps me involved and shows me that Valley Hi Toyota really cares about the community,” one of the surveyors said. Brian Ortega, Social Media Marketing at Valley Hi Toyota mentioned that #13 is going entice more contestants to strive to become finalists.

“We change it up every giveaway and this one is no different. People are so connected and comfortable being on their mobile devices that we recognize it as a way to engage with the community more often. With the popularity of Pokemon Go! we also see that people are competitive and willing to go the extra mile in order to catch a prize. “Without going into any further detail- this contest is really going to bring out the competitive spirits, especially those who want to increase their chance to win the vehicle,” says Ortega.

Valley Hi Toyota wants to remind everyone to tune into their Facebook page on Friday, July 29th at 11am to watch a Facebook Live broadcast of the unveiling of the vehicle. “You don’t want to miss this because not only are we giving hints on how to increase your chances, someone tuning in on Friday watching the Facebook Live broadcast will become our first finalist!” says Ortega.

In the meantime, potential contestants can text the word “WINACAR” to 444999 to receive a hint and get on the distribution list early.