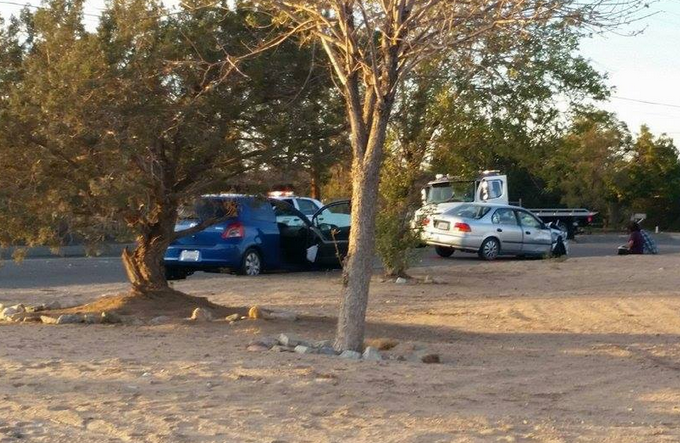 HESPERIA – (VVNG.com)- At approximately 5:16 p.m. dispatch received a call regarding a two vehicle collision near 7th Avenue and Palm Street in Hesperia. A female was reported to be bleeding heavily from her head, was breathing but not conscious. The rescue of the 45-year-old Hesperia woman required extrication.

The woman was driven by ground ambulance to the Hesperia Airport where the air ambulance prepared to airlift her to Arrowhead Regional Medical Center in Colton. According to the daughter of the injured woman, she is now stable, but has suffered from a traumatic brain injury as a result of the collision. “We are on the road to recovery and we just ask everyone to please pray for quick healing. She has been battling cancer for a year this month and she has been doing so well! We just want to see her get back on track and back home, “ said her daughter on a Victor Valley News post.

After a thorough investigation, including witness reports the accident is believed to be cause when both vehicles were heading northbound on 7th Avenue, the blue Toyota Yaris, which the injured woman had been driving veered right like she had planned on turning right at Palm Street, then quickly went left back into traffic to remain straight causing her to collide with the front of the vehicle behind her. The male driver, who was driving a silver 4-door Honda sustained no injuries as a result of the accident.