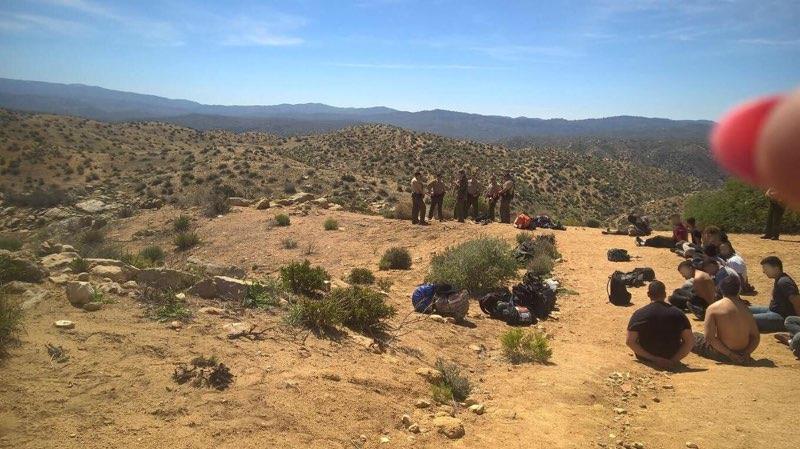 APPLE VALLEY-(VVNG.com):  On Sunday, March 27, 2016, at about 8:25 am, deputies from the Victor Valley Sheriff’s Station responded to reports of shots fired in the Deep Creek Hot Springs area of Apple Valley. The reporting party told the 911 operator more than 100 shots were heard and 5 to 7 subjects wearing turbans were seen in the area shooting assault rifles, handguns, and shotguns.

Due to this being a very rural location, Sheriff’s Aviation assisted to conduct an area check for the alleged shooters while patrol units from the Victor Valley Station responded. The sheriff’s helicopter arrived and located a group of males, 17 total, walking away from the creek carrying back packs and other items. Deputies from Apple Valley, Hesperia, and Victorville Police Stations also responded to assist.

Shortly after deputies arrived at the area the subjects were detained and searched. Several handguns, a rifle, and a shotgun were found during a search of the backpacks and bedding the subjects had been carrying. The subjects were very cooperative and were interviewed. A local FBI agent responded to assist with interviews. A records check of the subjects, their weapons, and their vehicles was completed. The records check revealed none of the subjects had a criminal history or outstanding warrants, the weapons were registered with the Department of Justice except for the rifle, and the vehicles were also registered.

Several hikers were contacted, but none of them witnessed the guns being fired. There was no evidence found that a crime had been committed by any of the subjects who were detained and they were released.

Anyone with information regarding this investigation is urged to contact Deputy S. Scranton or Sergeant D. Rodriguez at (760)552-6800. Callers wishing to remain anonymous are urged to call the We-Tip Hotline at 1-800-78-CRIME (27463) or online at www.wetip.com.