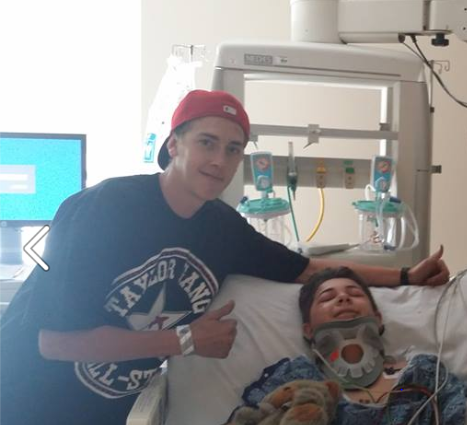 (VVNG.com)- On June 24th, an accident occurred near Highway 138 and the 15 Freeway that caused the tragic loss of two lives, 18-year-old Nicole Lyle and 16-year-old John Cabrera. The five teens were all headed to Huntington Beach in the PT Cruiser, being driven by 2013, Serrano High School graduate, Nicole Lyle. The vehicle was being followed by another vehicle with another load of friends also heading for the beach who witnessed, but were not involved in the accident. The vehicle was hit and crushed by a dump truck with a full load of fresh cement that lost their brakes at the bottom of a steep Highway 138 off ramp at an intersection. The vehicle was hit on the passenger side pushing it down an embankment with the cement truck subsequently landing on top of it in the parking lot of the Shell Station.

When firefighters arrived on the scene they arrived to see the horrific accident and immediately began to assess the scene than quickly worked to free the teens, who were trapped in the vehicle wreckage. It took the firefighters approximately 45 minutes to extricate Shane Gretzner, then approximately 15 additional minutes to get Mikey out of the front passenger side of the vehicle. According to his mother, it took nearly 2 hours from the time of the accident to get David out of the vehicle. David was trapped in the back passenger side of the vehicle with John Cabrera, who was seated in the back middle seat and Shane Gretzner who was in the backseat on the driver’s side.  Mikey Baker, who reached his arms around Nicole to protect her during the accident, had his arm stuck in that position until firefighters were able to remove him.

During the extrication of the trapped victims, on scene San Bernardino County Fire Captain said there were four they were working to rescue.  Nicole was found dead on arrival and John also unfortunately later died due to his injuries, at the scene of the accident. Three miraculously survived this accident, but now suffer with not only physical injuries, but the very clear memories of this tragic accident and the loss of two of their best friends. “They all can tell you word for word of what happened” said the concerned mother of 15-year-old David, Lisa Magnifico-Castaneda.

The surviving accident victims were taken by ground to Arrowhead Regional Hospital. 19-year-old, Shane Gretzner was treated for  broken ribs and was released the following morning.  Mikey Baker, is in the hospital recovering from a broken arm as well as nerve damage, and the treatment of a minor external head injury. Doctors are expecting to release Shane in three days.

David Castaneda is suffering from the most severe injuries, but is also doing well after the June 26th surgery done to help repair his broken bones. Doctor’s now feel that David should be released in about a week, he is currently recovering well and is happy to be in the company of visiting friends and family. “He finally got the neck brace off last night. He was excited about that because the doctors said that his spinal cord was perfect,” said Lisa Magnifico-Castaneda. David is now aware of the deaths of two of his best friends, which according to his mother is making him more determined to get out of the hospital in order to attend their funerals.

David’s mother has reached out to the public in the hope of some support to help ease her young son’s new fear of riding in a small vehicle and of large trucks. David’s family as well as the other families of the teens who were in the accident would like for David to be able to ride home in a SUV limo. They are asking for the help of the community to see if anyone is willing to help make this happen for David to make him not only feel safe and secure but also to help lift his spirits. “They need to know how many people love them,“ added Lisa.

These boys will ultimately recover from the physical damage done by this accident, but the emotional scars will likely take some time to heal. Memorial Car washes, yard sales as well as a Alaska Federal Credit Union account is set up to help assist the families of John and Nicole, with the funeral costs.

Additionally a link to donate online has been set up to help Lisa and Dave with expenses while they put their lives on hold to take care of their son David. His parents haven’t left his side since the they got to the hospital that terrible day. David’s dad was working in Colorado when he received the call about his son and he flew home that day. He won’t return to work until David is home and doing better. They are really struggling with David not working now. Anything will help. To donate please click on this link: https://www.gofundme.com/awezs8