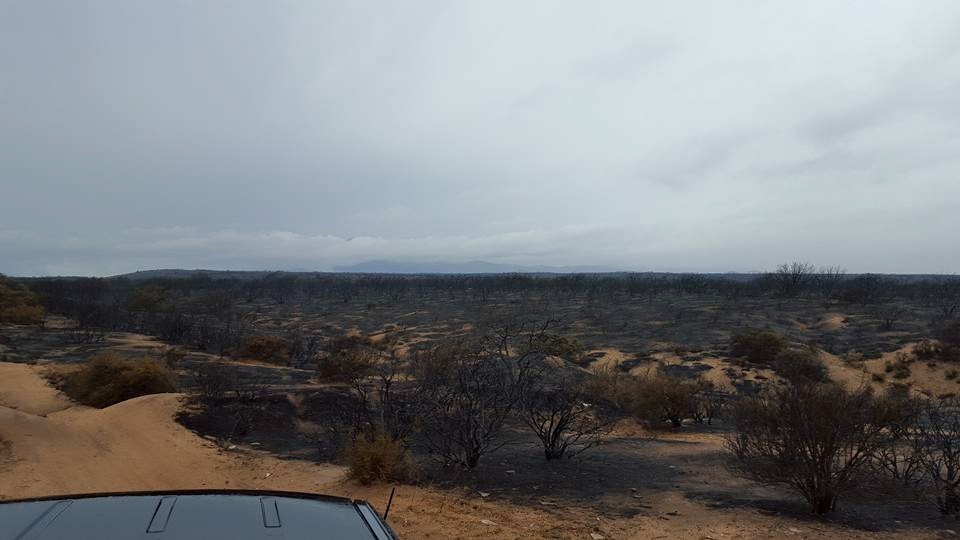 BALDY MESA-(VVNG.com): The North Fire is finally no longer at risk of growth according to San Bernardino County Fire Department officials. The fire that began on the center divider of the I-15 leaving commuters stranded and some even running from their vehicles is now 95% contained with 4,250 acres burnt. The containment came following an aggressive attack from firefighters from several different agencies.

The destruction is obvious as you drive through what looks like the war-torn path of the North Fire, charred landscape, 7 destroyed Baldy Mesa homes, 16 outbuildings gone and 44 vehicles also destroyed.  An additional home and four outbuildings have also been damaged. The Damage Assessment Team is assessing the damage at this time so the numbers may change.

The initial cause of the fire is unknown and remains under investigation.

A reporting party that called in the fire believed it was due to a discarded cigarette. The validity of that, at this time is uncertain, but what is certain is the devastation that this fire caused.

Fire officials moved in aggressively to fight the fire when reported at about 2:30 p.m. on Friday, July 17th, their air efforts hampered by an Unmanned Aircraft (a drone) taking up airspace. This suspended the air operations for about 25 minutes, risking loss of life and additional property damage.

All evacuations have been lifted at this time, but due to the large storm on July 19th, several roads have been impacted by flash-flooding causing closures. At this time, there is only smoldering and no growth is expected to occur.

Still only one major injury was reported as a result of this fire, that being to Corona Fire Captain, Roger Williams who suffered 2nd degree burns from his hip to ankle on Saturday, July 18th just before 4:45 p.m. He was transported to Arrowhead Regional Medical Center where he was treated and is recovering.