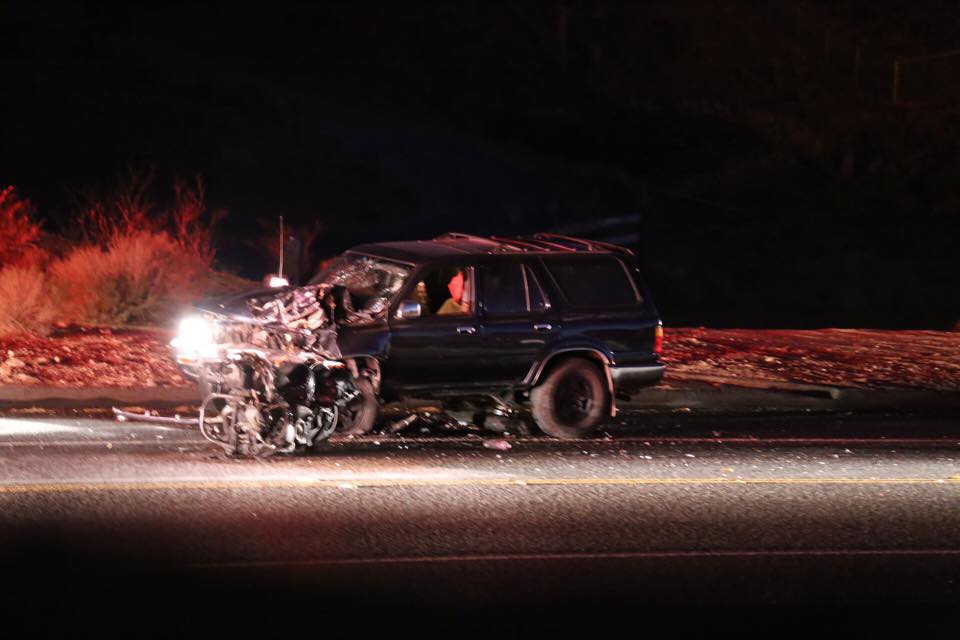 APPLE VALLEY:(VVNG.com)- Family and friends are mourning over the loss of a very special man named “tattoo” Kelly Combs, a 51-year-old resident of Hesperia. Combs was pronounced dead at the scene after the motorcycle he was riding collided with a Toyota 4-runner at approximately 6:40 p.m., on September 21, 2014.

Officer’s from the California Highway Patrol were dispatched to a head-on traffic collision on Rock Springs Road just west of Iroquois Drive.  According to CHP incident reports, Combs was ejected from his motorcycle after he struck the left front corner of the Toyota 4-runner while traveling at a high rate of speed. The motorcycle erupted into flames and by-standers stopped to help put out the fire.

Through the investigation it was determined the driver of the Toyota 4-Runner being driven by a 48-year-old male from Victorville was heading eastbound on Rock Springs Road averaging 50 mph. As the motorcycle was traveling in the opposite direction. The driver of the 4-runner attempted to avoid hitting the motorcycle but was unsuccessful.

Victor Valley News Group member Kali Capps shared the following: “My friend was driving the 4 Runner. I know the motorcycle was a Harley. And he was driving on the wrong side of the road. Unsure why or if he lost control. My friend couldn’t tell because it seemed as if he came out of nowhere. That part of the road is blind to anything ahead. My friend suffered a broken ankle and obviously is extremely upset about the incident. Prayers to the family of the deceased.”

The driver remained at the scene and fully cooperated with authorities, he was released a short time later.

“Tattoo Kelly, where do we begin about this wonderful man I am at a loss for words, I can’t believe your really gone. Over the years getting to know him has been a pleasure. You are my brother in christ, you have touched many and brought many to know the Lord. You were a wonderful man, father, grandfather, tattoo artist and husband. My heart goes out to everyone who was blessed to know him but most of all his wife Angela Lopez this woman is an angel she has stuck by his side through thick and thin. Kelly loved you with everything he had. May you rest in peace Kelly we love you,” commented Anita Michels.

“Rest in peace Kelly. What a great loss to humanity but a wonderful addition to heaven. Thank you for showing me and the high desert what true love for my neighbor looks like. You and your Wife Angela are both amazing people with a huge heart for the less fortunate, a great man of God now going home to the Lord, and a beautiful faithful servant wife is left behind to mourn your loss, but praise God! For we know this is not the end, we will see you again, on God’s time,” commented Rosalinda Gonzales.

During the investigation CHP had set hard road closures on both sides of Rock Springs Road. A male driving a red colored vehicle sped through the road blocks and stopped just feet within the body of the deceased male. CHP officer’s at the scene suspected the driver to be under the influence and conducted a field sobriety test. The unidentified male was arrested and taken into custody on suspicion of driving under the influence.

Family and friends have planned a fundraiser in honor of Kelly Combs. The fundraiser will be held this Friday, September 26, 2014 from 5-9 p.m., at Monica’s Tacos located at 11420 I Avenue in Hesperia.