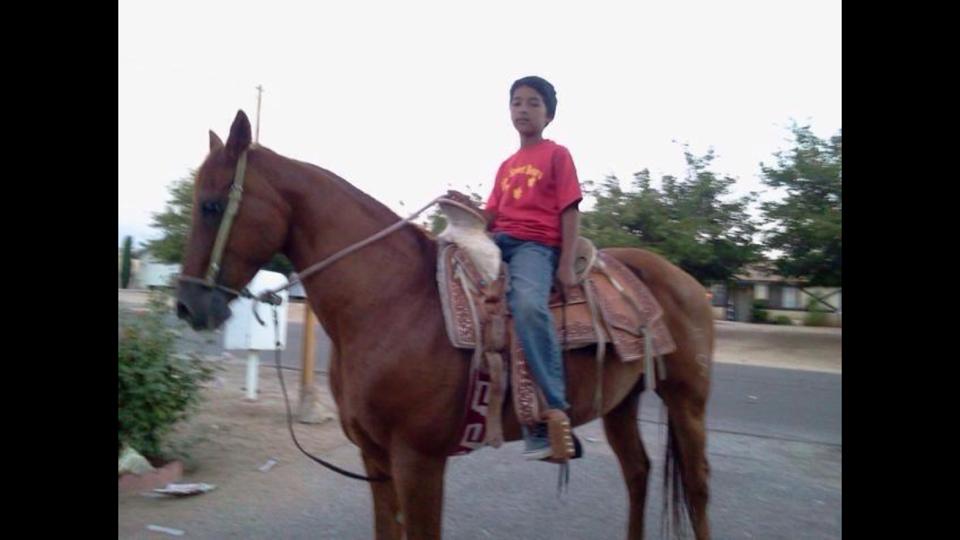 HESPERIA:(VVNG.com)-A tragic accident that claimed the life of a 10-year-old Hesperia resident, Arnold Covarrubias, occurred at Main Street and 3rd Avenue at approximately 8:47 p.m. on Thursday night. The boy according to witnesses was leaving a nearby liquor store, following behind his 21-year-old sister and her children on his bike.

A dog, which was believed to belong to the boy was in the street in moving traffic, causing bystanders to stop their vehicles to try to rescue the dog from possible being injured by the oncoming traffic. “I hate that I saw and heard everything, I was out of my car trying to help the lady with his dog. I don’t think he understood that we were trying to keep his dog from getting hit. I wish I could have screamed for him to stop in time, but he was just too fast on his bike,” said Nichole Magub on a Victor Valley News post.

At this time it is unclear if the boy was in the crosswalk or how fast the vehicle was moving at the time of impact. Eddie Garcia, the older brother of the deceased boy said that Arnold was with his sister at the time of the accident. “He was not chasing a dog, he was going to the store to buy milk and cookies,” states Garcia.

The posted speed limit in the area is 35 miles per hour, at this time, the cause of the accident is still under investigation. The SUV that hit the boy pulled over and remained at the scene. Witnesses proceeded to aid the boy by talking to him, and attempting to comfort him while others reportedly performed CPR until the paramedics arrive to take over shortly after. According to the Sheriff’s press release, the boy suffered trauma to both his upper and lower body.

The boy was transported by ground ambulance to Desert Valley Hospital where he was unfortunately pronounced dead at 9:35 p.m. An autopsy will be conducted to determine the cause of death. The San Bernardino County Sheriff Department is investigating the incident.