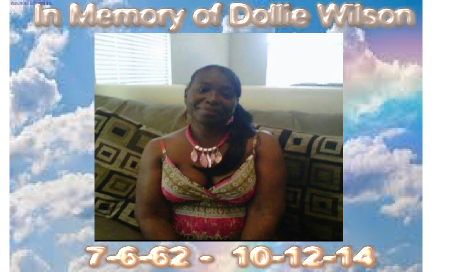 VICTORVILLE: (VVNG.com)- A local woman identified by family as 52-year-old Dollie Wilson from Victorville lost her life in a tragic accident on Cypress Avenue and Lindero Street in Victorville on Sunday, October 12th at approximately 7:10 p.m.

Wilson, sustained serious injuries as a result of the collision and was pronounced dead at the scene. Her three passengers, including one infant, a 9-year-old and a 25-year-old were airlifted to trauma centers. The 3-month-old  infant is in stable condition and is currently hospitalized for observation. The 25-year-old was released with a cervical collar, a fractured rib, and a spinal fracture. The 9-year-old is still hospitalized, but according to family is in stable condition.

The male driver was taken to a local hospital for treatment of minor injuries.

Dollie has left behind three children, ages 26, 24 and 14 years old as well as two grandchildren who she was raising, ages 8 and 10 years old. She also had a 3-month-old foster child that was with her at the time of the accident. So many are heartbroken about the loss of this great woman including her sister, nieces, nephews, great nieces and nephews as well as her many cousins and friends. The family is at a loss as to do without the loving care of Dollie toward her family.  They now, not only will have to restructure their lives with the minor children that she once cared for, but will also have to bury their loved one.

The family is looking for assistance from the community, “we need any kind of help we can get,” said the niece of Wilson, Trasie Johnson. The family will be setting up a memorial fund to help with the burial and likely another account to assist in some of the families immediate needs in order to lessen the stresses surrounding this sudden and tragic loss. Deputies are still investigating whether speed or alcohol played a factor in this collision.

The intersection of Cypress Avenue and Lindero Street was closed until approximately 0230 hours.  This is an ongoing investigation by the Victorville Major Accident Investigation Team (MAIT).  Anyone with information about the collision is requested to contact Sheriff Service Specialist D. Whitson at 760-241-2911.