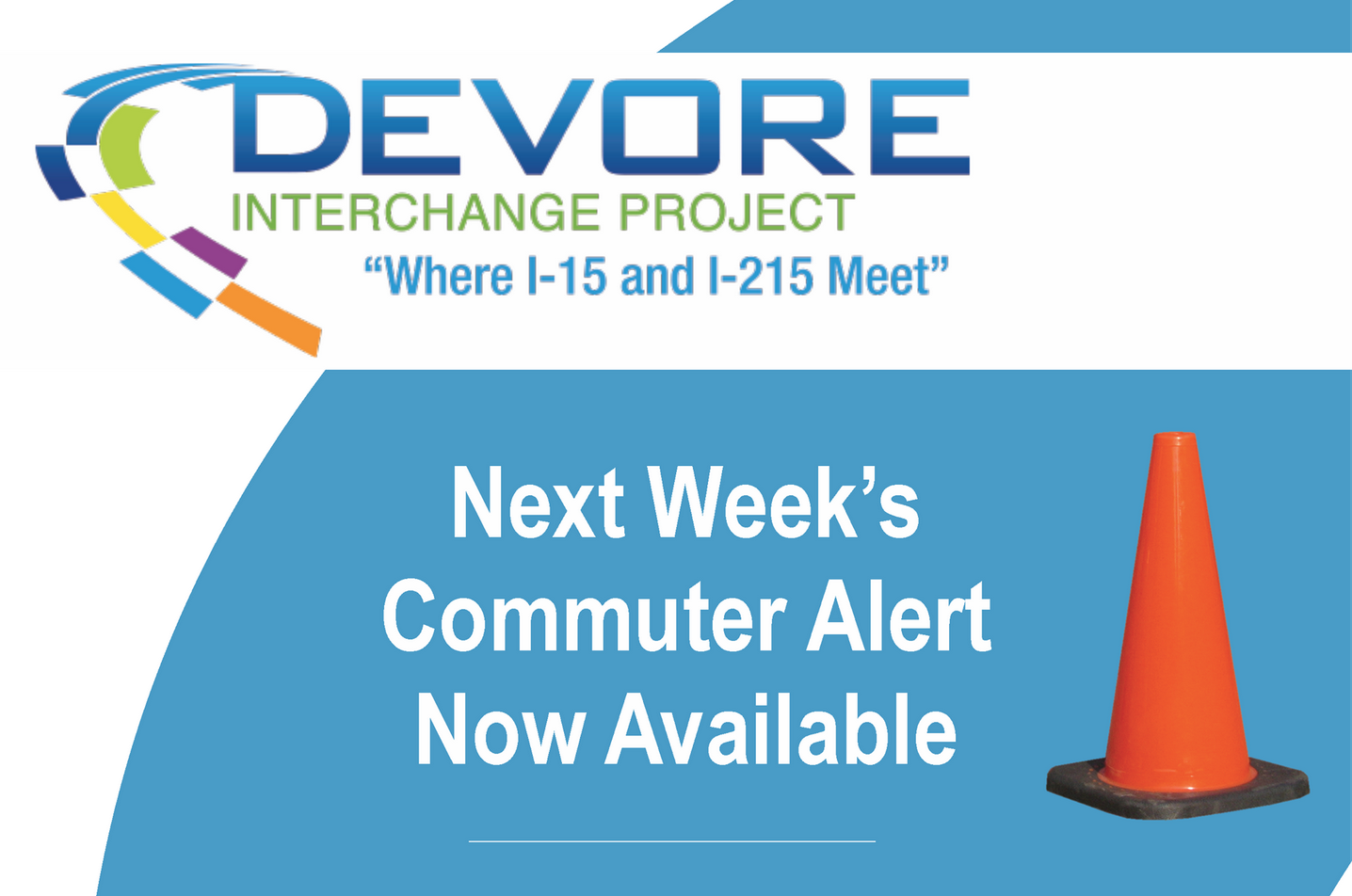 DEVORE:(VVNG.com)– As part of the Devore Interchange Project, crews will conduct nighttime activities. This will necessitate local street closures for the safety of the public and workers. Following are details of construction activities that will begin on Monday night, July 21 and end on Saturday morning, July 26, 2014. Closure restrictions will be lifted each day so motorists can travel at peak daytime traffic times. Noise can be expected with these activities.

Please note that information contained in this commuter alert is subject to change without notice based on weather, field conditions or other operational factors.

*NOTE – There are no planned nighttime freeway closures this coming week.

Merge into the Proper Lane

Related Topics:cajon pass
Up Next

Car Fire on Freeway Spreads to Near By Brush 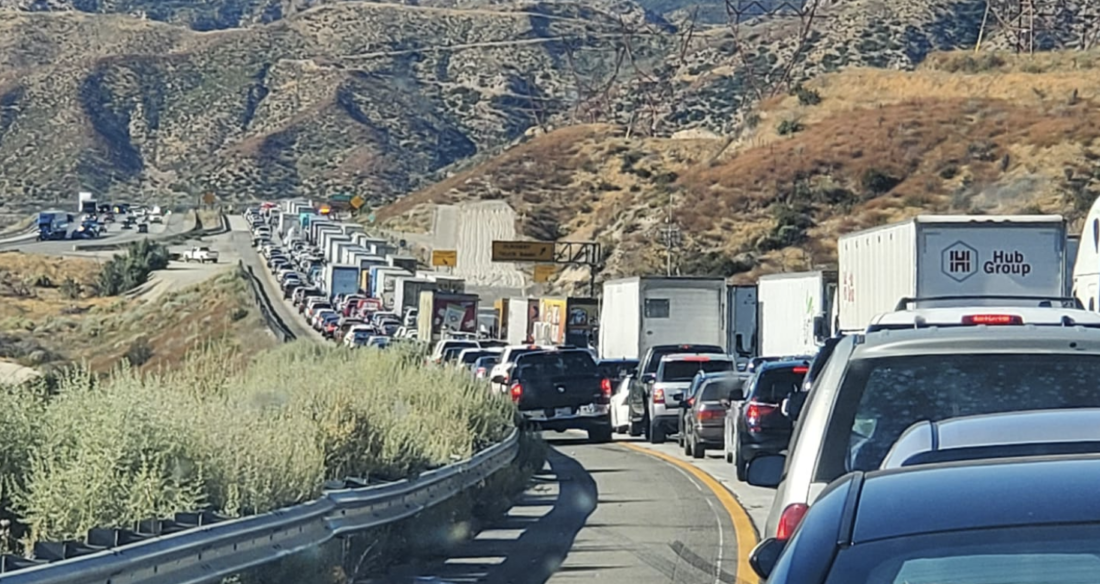 Traffic on the SB I-15 at a complete stop due to the accident. (photo taken by Emzie Simpson)

CAJON PASS, Calif. (VVNG.com) — A Saturday morning accident on the southbound I-15 in the Cajon Pass prompted emergency personnel to stop traffic and land a helicopter on the freeway.

At about 7:48 AM on August 1, 2020, 911 dispatch received reports of a vehicle over the side with an occupant still trapped inside, near the escape ramp.

San Bernardino County Firefighters responded to the scene and confirmed the vehicle was approximately 100 feet over the side and extrication would be required.

A medical helicopter was requested to respond to the incident, prompting authorities to shut down the freeway. At approximately 8:20 AM., Mercy Air 22 departed from the scene and subsequently airlifted the injured person to Arrowhead Regional Medical Center.

The 2nd vehicle involved in the incident stopped, however, it’s unknown if the driver reported any injuries. Motorists on the SB I-15 are reporting traffic is backed up for several miles. 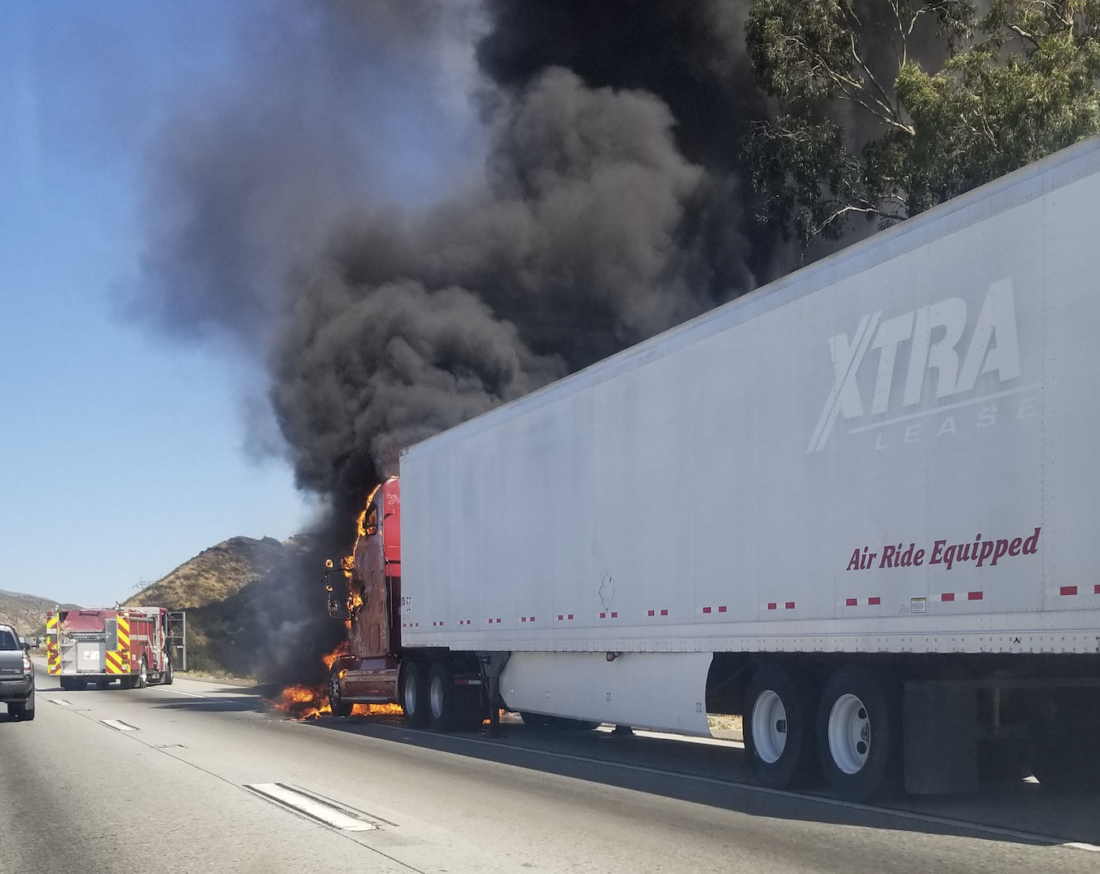 CAJON PASS, Calif. (VVNG.com) — A big rig fire in the Cajon Pass sparked a brush fire that has prompted lane closures on the northbound I-15.

The fire started in the cab of the semi and spread to nearby vegetation in the canyon area along the freeway. The winds fanned the flames uphill consuming an estimated 5-10 acres of vegetation with a slow to moderate rate of spread.

At least two air tankers responded and were assisting with air support. The trailer is loaded with 72k lbs of food.

A SIG-ALERT was issued at 10:30 am. The no. 4 and 5 lanes north of the incident will remain closed for an unknown duration.

MOUNTAIN PASS, Calif. (VVNG.com) — The California Highway Patrol is investigating a fatal multi-vehicle crash near the California-Nevada border that left one person dead and several others injured Friday afternoon.

Emergency crews responded and found multiple vehicles involved in the crash with two of them overturned.

A white pickup truck overturned onto the shoulder and a second vehicle overturned and landed in the center divider. Several occupants were reportedly ejected and children were injured, according to radio traffic reports.

San Bernardino County Fire along with Clark County Fire both responded to assist. Firefighters pronounced one person deceased at the scene and requested a helicopter for a person with life-threatening injuries.

California Highway Patrol officers shut down traffic to allow the helicopter to safely land on the freeway. Multiple ground ambulances responded and transported 3-4 other people to area hospitals.

At 4:09 PM officials issued a SIG-ALERT due to the only one lane being open in the both north and south. The lane closures were expected to remain in effect to at least 9:00 PM, per the logs.

The California Highway Patrol Barstow office is investigating the crash and anyone with information is asked to call 760-255-5900.

UPDATE 7/25 @ 7AM — According to an update from the San Bernardino County Sheriff-Coroner office, Tyrese Arnold, 21, a resident of Bakersfield, was driving a 2007 Toyota Camry north on the I-15 when he struck the rear of a Toyota Tacoma. Both vehicles went into the center divider. Arnold was pronounced dead at the scene.