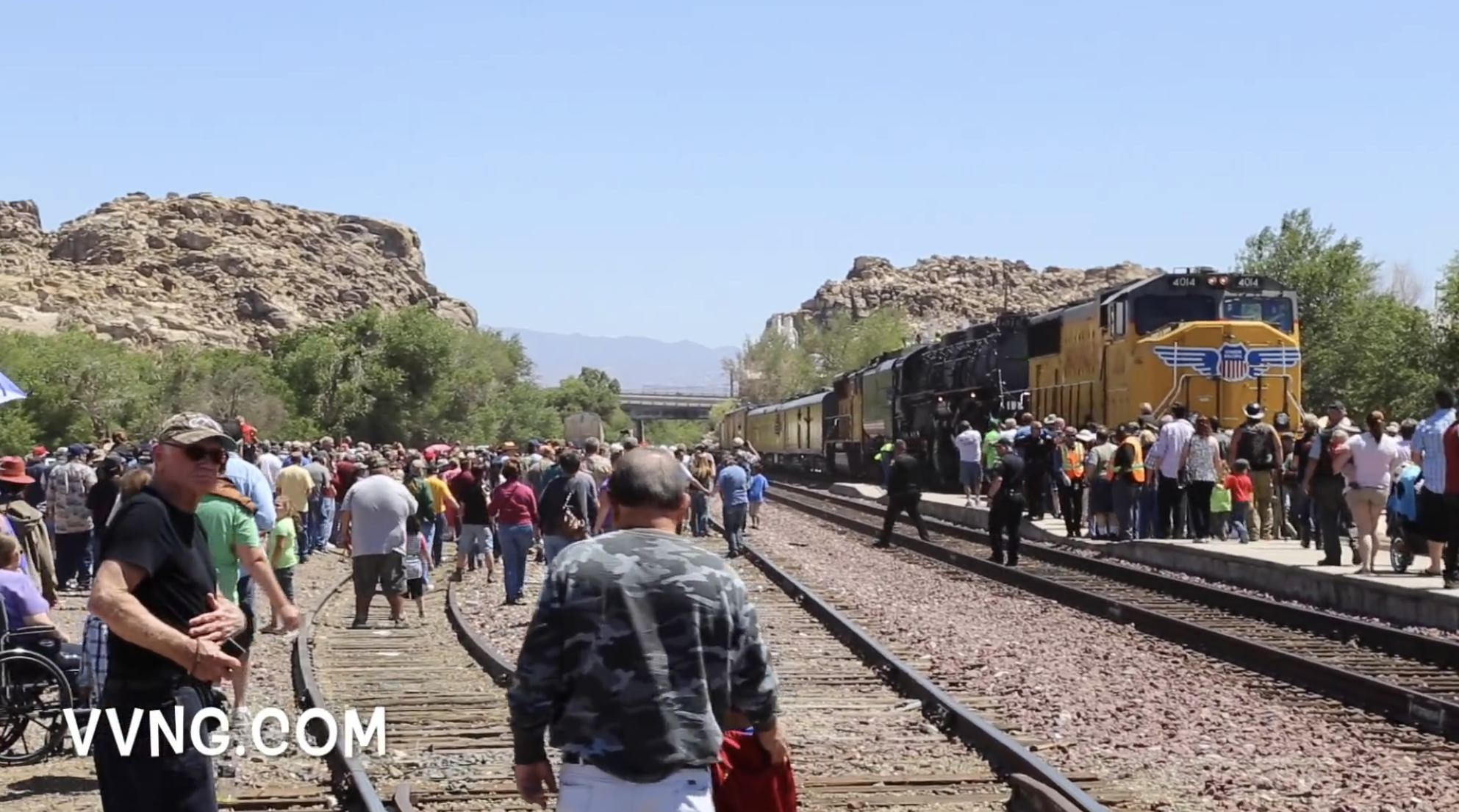 The locomotive will pull a special Union Pacific passenger train consisting of immaculately maintained 1950’s era Heritage Fleet passenger cars commemorating the 150th anniversary of the completion of the first transcontinental railroad at Promontory, Utah, on May 10, 1869, according to The Railway and Locomotive Historical Society, Southern California Chapter.

Called “The Great Race Across the Southwest”, the Big Boy train will depart its home base in Cheyenne, Wyoming on September 27 and arrive in Victorville on October 8th, 2019, before going to the greater Los Angeles area on October 9.

On October 12 and 13 the train will make a special excursion with passengers from West Colton to Barstow on Saturday and from Barstow to West Colton on Sunday.

The train will depart the West Colton area on October 15 and travel through Beaumont, Indio, and Niland on its way to Yuma, Arizona. The tour will continue through Arizona, New Mexico, Texas, Arkansas, Kansas, and Colorado before returning to Cheyenne in November.

The world’s largest steam locomotive, Union Pacific’s Big Boy 4014 has very close ties to Southern California. Originally built in 1941 to haul wartime freight across the Rocky Mountains in Wyoming, the locomotive was retired in 1959. In 1961, Union Pacific donated the locomotive to The Railway and Locomotive Historical Society, Southern California Chapter, a rail preservation group that operates a railroad museum at the Los Angeles County Fairplex in Pomona, known today as the RailGiants Train Museum.

Of the eight surviving Big Boys, 4014 was deemed to be the most suitable for restoration. The railroad had big plans to commemorate the 150th anniversary of the Promontory event and wanted a restored and fully operational Big Boy to play a key role in the activities.

A deal was reached with the Museum in 2013, and the Union Pacific Steam Crew arrived on-site at Fairplex and began preparations to move the locomotive.

The locomotive was moved to Union Pacific’s West Colton yard in January 2014, and in May 2014 it was moved to Cheyenne to begin the restoration process. Similar to moving space shuttle Endeavour and “The Big Rock” across Los Angeles in 2012, thousands of people lined the route to witness this iconic locomotive’s amazing journey to its new life.

After a five-year multi-million-dollar restoration effort performed by Union Pacific’s fabled Steam Crew, the fully operational Big Boy made a short debut test run on May 2, 2019. On May 4, it departed Cheyenne along with Union Pacific’s other operable steam locomotive, #844, for the “Great Race to Ogden”.

Tens of thousands of railfans flocked to Wyoming and Utah from all over the world to witness a spectacle that few believed would ever happen. They were not disappointed, as 4014 and 844 performed flawlessly through the spectacular scenery that was the Big Boy’s home territory during its years of regular service.

On May 8, the Big Boy and 844 met each other face-to-face in Ogden before a crowd of thousands to commemorate the driving of the golden spike, joining California to Omaha by rail, one of the most pivotal events in early American history.

In July and August, The Big Boy travelled through the Midwest, visiting towns in Nebraska, Iowa, Minnesota, Wisconsin, and Illinois. The current trip will visit many towns in the southwest and south-central states. No plans have been announced for 2020, but the Big Boy will hopefully continue its travels around the Union Pacific system.

Built by the American Locomotive Company (Alco) in Schenectady, New York, The Big Boy was designed to pull heavy freight trains up the steep mountain grades east of Ogden Utah, a critical segment of the rail route between east and west.

With World War II approaching, the biggest locomotive that could be produced was needed, and Union Pacific engineers worked with their counterparts at Alco to produce a locomotive that weighed 600 tons, had a length slightly over 132 feet, developed close to 7000 horsepower, and could pull a 4,000 ton train up the mountain grades.

The boiler on a Big Boy could boil over 100,000 pounds of water per hour at 300 psi pressure to drive the locomotive’s four enormous pistons, consuming about 12,000 gallons of water and 6 tons of coal per hour in the process.

The restored Big Boy 4014 has been converted to burn fuel oil instead of coal (recycled lube oil is used as fuel), and typically consumes about 200 gallons of water and 20 gallons of fuel per mile. Since the height and width of the locomotive was fixed by the dimensions of existing bridges and tunnels, the only way for the designers to build a larger locomotive was to make it longer, and the Big Boy is so long that the frame is articulated, or hinged, in the middle to allow it to go around curves.

The railroad was originally thinking of naming the locomotive the “Wasatch” after the mountains it would operate in, but an unknown Alco employee famously wrote “Big Boy” with chalk on the front of the first locomotive produced, and the name stuck.

Over the next 18 years, the Big Boys carried on with their duties and developed a reputation as a reliable workhorse, a superbly designed machine, a masterpiece of American engineering and craftsmanship.

Big Boy 4014 made the second-to-last revenue run of a steam locomotive on Union Pacific in July 1959, followed by the last run a few hours later with Big Boy 4015. It was the end of an era.

Over the next 52 years, the Big Boy would be visited by tens of thousands of people at the LA County Fairplex in Pomona.

Many came from other countries, and the Museum’s visitor register contains many entries from Europe, Australia, Japan, China, and Korea to name just a few. Children came to see it during their annual visits to the Fair.

They grew up and brought their own kids to see it, and then their grand kids. The Big Boy was always a Big Attraction, and kids liked to crawl into the massive firebox, as big as a living room. One year a whole class of first graders crawled in.

In the 1990’s, RailGiants got the whistle working. The moan of a Big Boy echoed over the Fairplex, as hundreds of people lined up to take a turn on the whistle cord.

In the summer of 2002, KCET’s Huell Howser was excited to take Channel 28 viewers on a tour of Big Boy No. 4014 during his public television program, Visiting California with Huell Howser. blogs.chapman.edu/huell-howser-archives/2017/03/03/fairplex- railroad-museum-visiting-1015/

In 2004, The History Channel included a segment on the Big Boy in one of their Modern Marvels episodes, “More of the World’s Biggest Machines”. The segment was filmed at the RailGiants Train Museum at Fairplex and featured the 4014.

The subject of restoring a Big Boy was a frequent one over the years, but the reality was that such an outcome was highly unlikely. The restoration of such a large locomotive would be very difficult, expensive, and even if successful, there would be very few, if any, railroads that would even consider giving it a place to run. Still, a very small group of RailGiants volunteers did their best to maintain the locomotive in the best condition they could, oiling, greasing, painting and protecting. The relatively dry Southern California climate helped. When Union Pacific came calling in 2012, RailGiants agreed to give the 4014 back to Union Pacific. Part of the deal included a fund-raising excursion pulled by the 4014 to benefit the Museum. That highly anticipated moment is now approaching.

On Saturday October 12 and Sunday October 13, Union Pacific will operate a special passenger train pulled by the Big Boy including passenger cars from the railroad’s Heritage Fleet, a collection of 1950’s era passenger cars maintained in pristine condition and used for special Public Relations events. The Saturday trip will travel up

famous and scenic Cajon Pass between West Colton and Barstow roughly following historic Route 66, and the Sunday trip will travel from Barstow back to West Colton. The trip is a fundraiser for the RailGiants museum, which returned the 4014 to Union Pacific and made a Big Boy restoration possible, a “Steam Dream” come true. Opportunities for the public to ride behind the Big Boy in a Heritage Fleet passenger car are very rare, and no railroad in the United States has done what Union Pacific is doing on this trip.