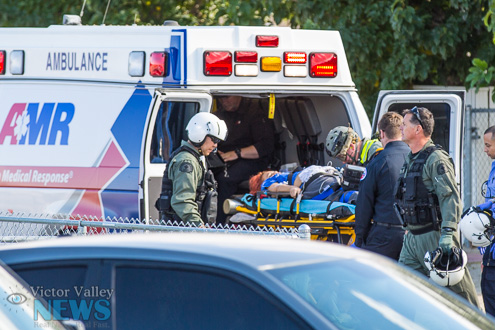 APPLE VALLEY:(VVNG.com)- Two people were shot and airlifted from St. Mary’s hospital after an incident ensued at an apartment complex.

Police investigate the shooting scene outside of an apartment complex on the 17900 block of Quantico Road. (Photo by Gabriel D. Espinoza)

On Sunday, November 15th at 12:01 P.M., two separate calls of shots fired were reported on the 17900 block of Quantico Road in Apple Valley.

A male and female believed to be in their 20’s were airlifted with moderate injuries to out of area trauma hospitals.

Deputies responded and detained three subjects who are currently being held for questioning. As of now, no arrest have been made however one of those detained is believed to be a suspect.

According to Sergeant Laura Marks with the Apple Valley police department, the two victims resided in the apartment complex and a motive for the shooting has not been determined. She also added that a weapon has not been recovered.

At least one shell casing was located at the scene and it is believed there are no additional outstanding suspects.

More information will be updated as it becomes available