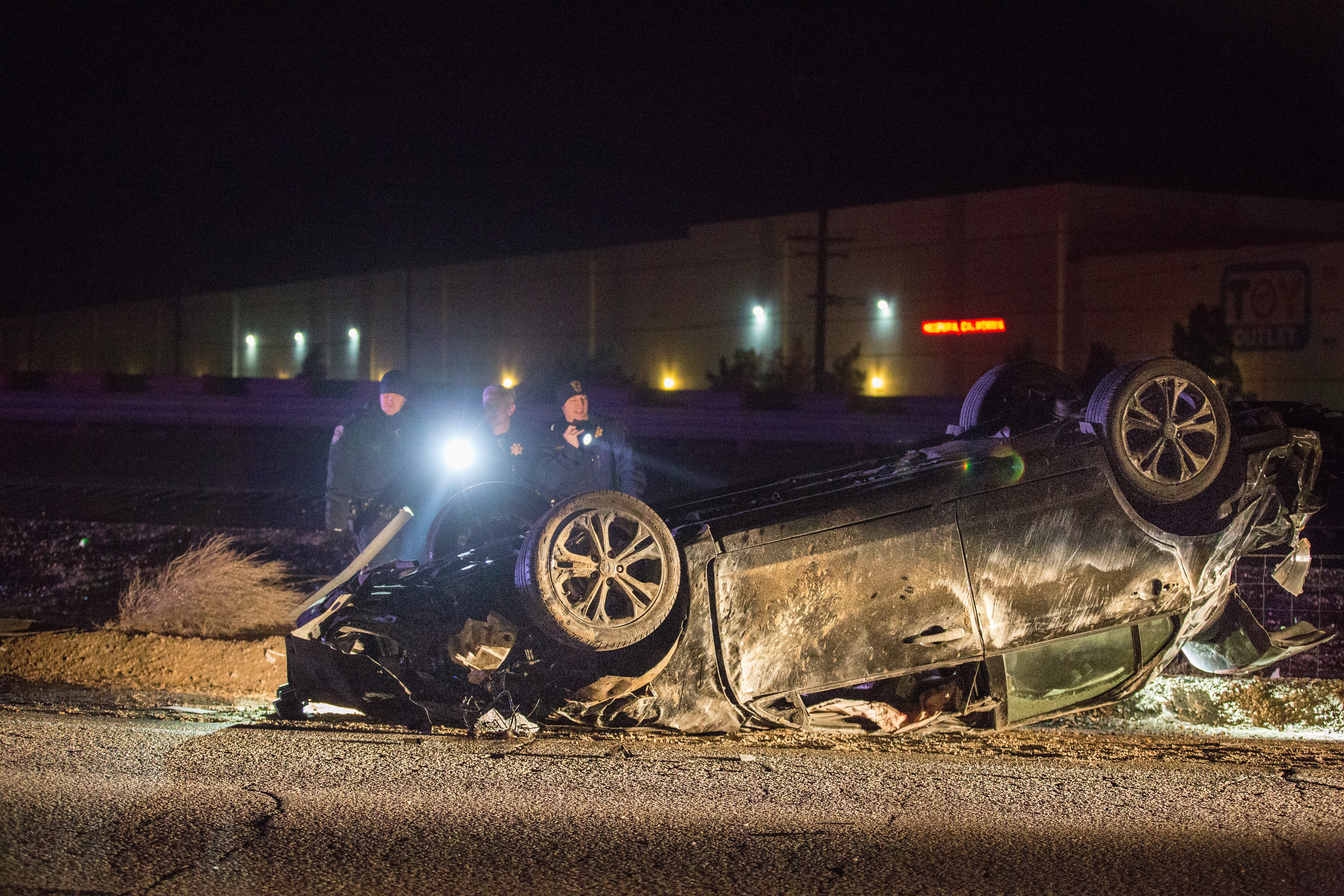 Victor Valley, Calif. (VVNG) Deputies and First Responders had their work cut out for them Monday night after two rollovers were reported close to each other.

At 10:18 p.m. deputies and medical personnel arrived on scene and located a 2012 Ford Fusion flipped on its roof. Upon searching the vehicle they discovered the person fled on foot into the desert field.

A woman in the struck vehicle, a Chevrolet Spark, was treated by paramedics on scene. Her car was partially lodged over the side of a ditch along the northbound 15 freeway.

A Chevrolet Spark was partially lodged in a ditch after a driver a the Ford that foot bailed. (Gabriel D. Espinoza, Victor Valley News)

The flipped Ford, which came to rest on the southbound lane of Mariposa Road after it departed from the freeway, still had music blaring from the speakers.

Deputies deployed a sheriffs helicopter and a K9 to assist in the search for the suspect, however deputies were unable to locate him.

About half-hour later and a few miles down the road another rollover collision was reported. That accident occurred on the northbound 15 freeway just south of the Nisqualli offramp.

Two people in the rolled car, a white 2001 Toyota Camry, was successfully able to exit their vehicle uninjured, and a 12-year-old passenger in the other involved vehicle, a white 2015 Nissan Altima, was transported with complaints of back injury.

It’s unclear how the first accident occurred, however the second accident was said to be caused by other vehicles that were street racing on the freeway, causing the Camry to lose control and crash into the Nissan.

“Thankfully everyone involved made it out ok, I’m very grateful” commented Bethanee McKay, the mother of the injured 12-year-old girl.

The Camry had two occupants in the vehicle that exited without injuries. (Gabriel D. Espinoza, Victor Valley News)

A 12-year-old passenger was sleeping at the time of the accident and was transported for back pain. (Gabriel D. Espinoza, Victor Valley News)