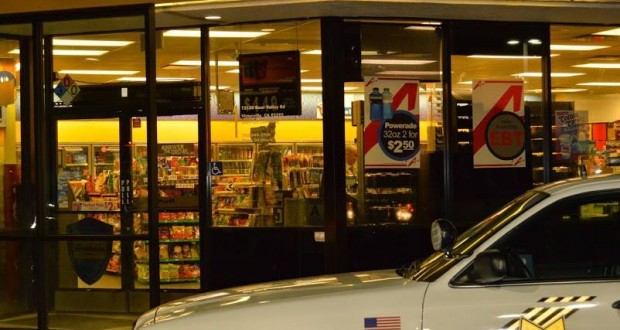 VICTORVILLE-(VVNG.com):  Two suspects are behind bars today following a November 12th robbery at the Shell Gas Station located at the corner of Highway 395 and Bear Valley Road. At about 2:38 a.m. a victim reported being robbed by two male suspects, later identified as 24-year-old Victorville resident, Christopher Craft and 22-year-old Victorville resident, Jesus Regalado.

According to San Bernardino County Sheriff’s officials the male victim observed what appeared to be a handgun being loaded outside of the business by the two male suspects. Both suspects then entered the store and told the victim they were robbing him. The suspects forcefully took cash from both the victim and the store register before fleeing the scene. While fleeing the scene, the suspects crashed their vehicle while leaving the area and were subsequently pursued by the victim of the traffic collision.

As deputies from the Victorville station conducted an area search, they located the suspect vehicle about 2 miles away, near Bear Valley Road and Monte Vista Street. Deputies then heard commotion near the intersection and upon investigating the source, noticed that the victim of the traffic collision was detaining one Craft. Deputies then took him into custody without further incident.

Deputies were able to then track shoe prints from the suspect vehicle to suspect, Jesus Regalado near Sycamore and Mesa View. Regalado had the money that was stolen from the gas station in his possession and was also taken into custody without incident.

Both suspects were positively identified by both the victim and video surveillance as the suspects who robbed the gas station. Both suspects were booked into the High Desert detention center for robbery. Regalado and Craft are both being held in lieu of $100,000 and are expected to appear at the Victorville Superior Court on Monday, November 16th for an arraignment hearing.