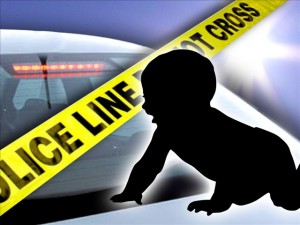 RANCHO CUCAMONGA:(VVNG.com)- A Rancho Cucamonga man has been arrested for Child abuse with great bodily injury resulting in a comatose state and paralysis of a two-month-old infant.

According to a press release, on Wednesday, August 6, 2014 at approximately 10:00 a.m., Forensic Pediatricians from Loma Linda University Medical Center contacted the San Bernardino County Sheriff’s Departments Crimes against Children Detail regarding a two-month-old male infant. The parents brought the infant to the hospital on August 3, 2014. The infant was experiencing unexplained seizures, vomiting and uncontrollable limb movement. Subsequently, the infant was moved into the pediatric intensive care unit of Loma Linda University Children’s Medical Center.

Further examination and testing revealed the infant had suffered a traumatic brain injury, causing blood to pool in the brain cavity depriving the infant of oxygen needed to sustain brain life.

The child’s parents were subsequently interviewed by detectives from the Crimes against Children Detail. Through their investigation, detectives determined the victim endured two individual acts of being shaken and ultimately suffered from shaken baby syndrome, also known as abusive head trauma. The father, 32-year-old Weifeng Tang, delayed taking the two-month-old victim to the hospital for two days. Due to the lack of immediate treatment, the infant also suffered from oxygen deprivation causing irreparable damage to his brain. The victim is currently in a coma state and being treated for extensive brain damage. The long-term effect of the injuries are still unknown.

On Thursday, August 7th, police responded to the 10900 block of Terra Vista Parkway in Rancho Cucamonga and Weifeng Tang was arrested and booked into Central Detention Center for PC 273 ab(b) – Child abuse with great bodily injury resulting in a comatose state, paralysis of a child under 8. Tang’s bail was increased to $ 2,000,000.00 on August 11th. Tang is scheduled for arraignment on Tuesday, August 12, 2014 at the Rancho Cucamonga Superior Court. Both parents are citizens of China, and came to the United States to give birth to their second child, the victim.

This is an ongoing investigation. Anyone with information regarding this crime is asked to contact Detective David Clifford at the San Bernardino County Sheriff’s Department, Crimes against Children Detail, 909-387-3615.

[box type=”warning” align=”aligncenter” ]The Sheriff’s Department would like to remind parents of the dangers associated with shaking a child. Shaking can lead to severe brain injury, other physiological injuries, and/or death.[/box]

Related Topics:Child Abuse
Up Next