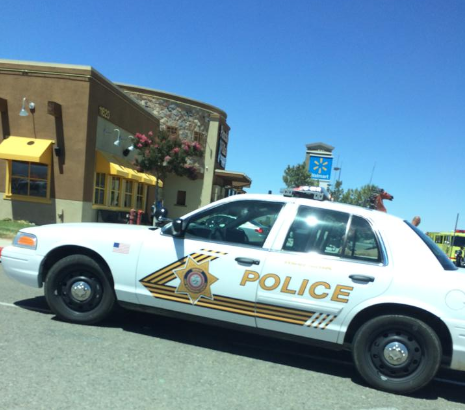 HESPERIA:(VVNG.com)- On Friday, July 11th at approximetely 1:00 p.m., a robbery took place in the ampm parking lot at the corner of Main Street and Key Pointe Avenue in the city of Hesperia.

Two unidentified male suspects grabbed a purse belonging to an ampm employee on her way into work. Following the purse theft they quickly got into their gold-colored sedan and sped off.  A witness chased the suspect to Amargosa, just north of Dunia Road. The suspects lost control of the vehicle while attempting to turn into a driveway leaving the vehicle on the curb near the Pancho Villas restaurant.

The two male suspects exited the vehicle then ran on foot to the nearby Walmart, where the witness tackled one of the suspects. The second suspect was stopped by another witness on the scene. “I saw it all, a manager got him but he punched her in the face then other people helped, it was crazy,” stated witness Olivia Apirramaz. Thanks to the actions of the good Samaritans both suspects were arrested at the scene.

For the latest news be sure to join our FB group VVNG with over 44,000 members www.facebook.com/groups/victorvalleynews