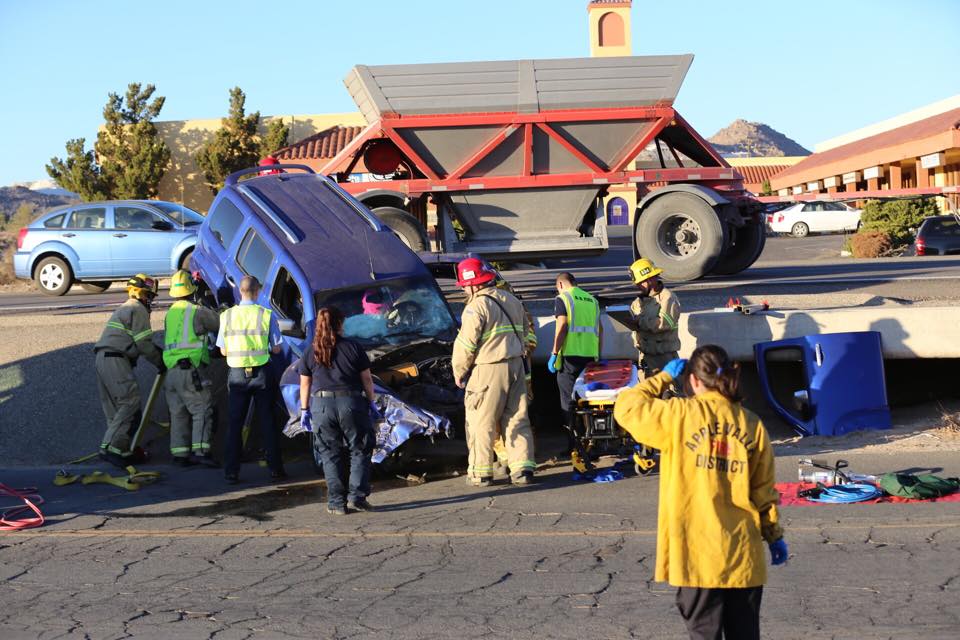 APPLE VALLEY – (VVNG.com): Two people were airlifted after the vehicle they were in collided into the back of a semi on Highway 18 near Tao Road. Sheriffs dispatch received several calls reporting the collision just after 4:00 p.m., on Friday November 21, 2014.

According to unconfirmed witness reports, a Roberson’s Transportation tractor-trailer was stopped with traffic in the roadway waiting for a red light. A blue colored Chevrolet HHR occupied by two was traveling eastbound on highway 18 when for unknown reasons the vehicle collided into the rear of the tractor-trailer. The driver attempted to make a sharp right turn causing the vehicle to leave the roadway and eventually coming to a rest in the embankment facing onto outer highway 18.

The two occupants in the vehicle were trapped and required extrication. Firefighters had to use vehicle stabilization equipment in order to safely treat the patients while in the vehicle.

As a result of their injuries two airships were requested to transport the victims. The landing zone was established at St. Mary’s hospital. One patient was taken to Loma Linda Medical Center and the other was taken to Arrowhead Regional, according to scanner traffic. At this time the condition of either person is unknown. The driver of the tractor-trailer was not injured in the collision.

The right lane was temporarily blocked off causing eastbound traffic on highway 18 to back up down to Kasota Road.

The exact cause of the collision is currently under investigation. More information will be updated as it becomes available. 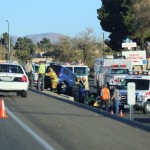 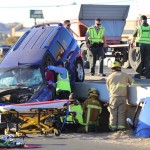 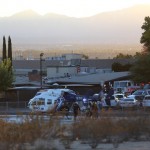