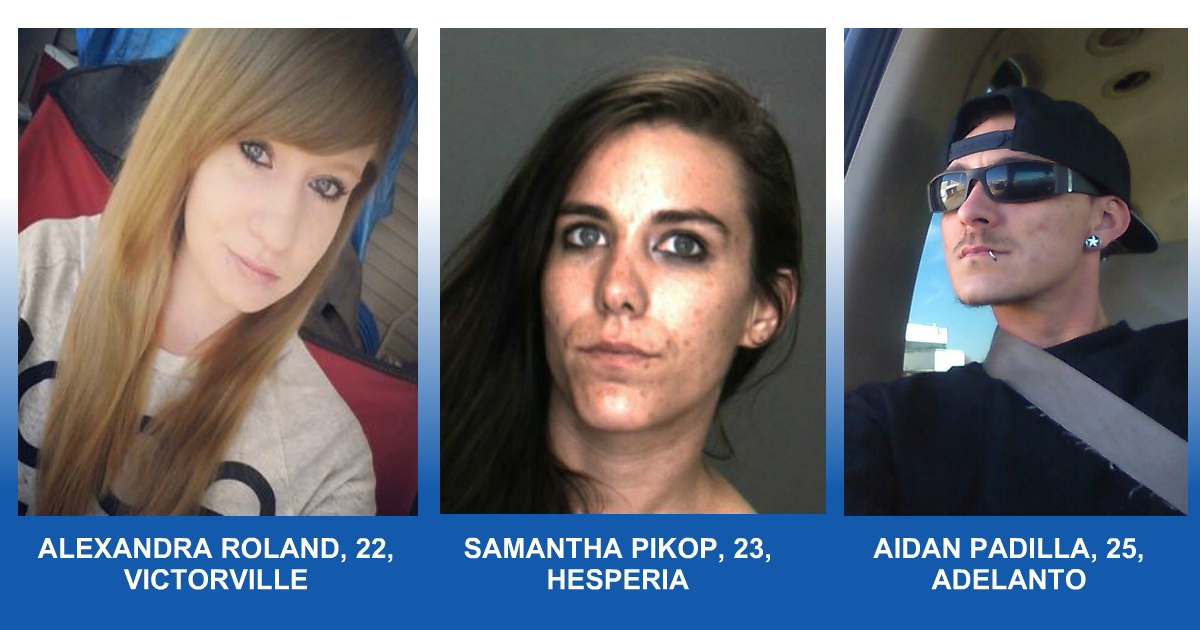 TWIN PEAKS, Calif – (VVNG.com): Three Victor Valley residents have been arrested for identity theft and possession of stolen property, according to a news release.

On July 30, 2016, deputies from the Twin Peaks Sheriff’s Station responded to a suspicious vehicle call in the 600 block of Acacia Drive, in the community of Crestline.

Deputies were led to the location after a witness called in to report a subject wearing a ski mask standing next to an older model, Nissan Sentra, green in color.

Deputies arrived on scene and made contact with the three occupants of the vehicle, who were identified as 25-year-old Adelanto resident Aidan Padilla, 23-year-old Hesperia resident Samantha Pikop, and 22-year-old Victorville resident Alexandra Roland.

Deputies discovered one of the subjects, Samantha Pikop, to have several active warrants for her arrest. She was taken into custody and deputies searched the vehicle incident to her arrest.

During the search, deputies discovered several checkbooks with names on them which did not match any of the occupants of the vehicle. Deputies also located tax returns and other paperwork with names, and social security numbers on them. Also found in the vehicle was a large amount of mail, belonging to the owners of the tax returns and paperwork. The deputies contacted the owners of the paperwork and checkbooks and discovered the three occupants did not have permission to be in possession of the items.

Deputies believe Pikop and Padilla may be linked to burglaries in the mountain communities, as well as the High Desert. If you have further information regarding this case or additional crimes connected to Roland, Padilla and Pikop, please contact the Twin Peaks Station at (909) 336-0600 or We Tip 1-800-78-CRIME.