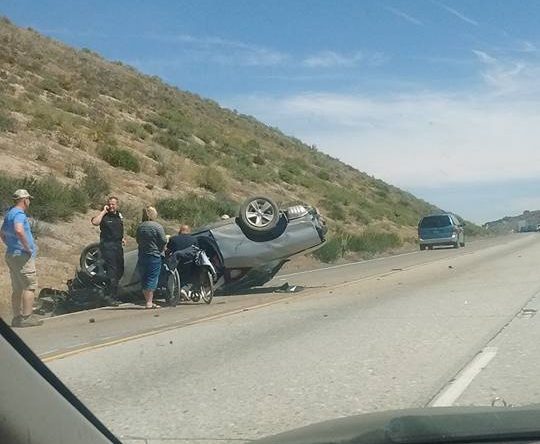 The rollover traffic collision with extrication was reported at 11:12 AM, on Tuesday, April 19, 2016.

CHP officials said that upon arrival they located a white Mercedes with front-end damage on the right-hand shoulder and a silver Dodge Sedan in the center divider area partially blocking the #1 (fast) lane.

Witnesses report that the Dodge hit the guardrail sending it back into lanes of traffic in the path of the Mercedes causing the two to crash. The crash caused the sedan to overturn resting on its roof.

An off-duty AMR supervisor was on scene shortly after the collision and  attempted to assist.

One man was trapped in the vehicle requiring extrication. The San Bernardino County Fire Department arrived on scene and were able to free the man in around 10 minutes. He was transported by ground ambulance to Arrowhead Regional Medical Center for treatment of his injuries.

The California Highway Patrol is investigating the collision in order to determine the cause.