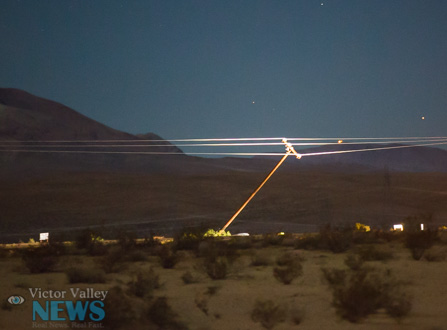 NEWBERRY SPRINGS-(VVNG.com): One man was transported to the hospital for treatment of serious injuries after crashing into power pole on Saturday evening. At about 4:55 p.m. dispatch received the report of a white Chevrolet Trailblazer crashing into a power pole on the I-15 South just north of Lake Delores.

“The newer white SUV was driving on dirt road alongside of the freeway and lost control. He was speeding as the left front tire flew off across the freeway. I saw him hit a telephone pole head on, the pole broke and landed on his car,” said Yolanda Padilla on a Victor Valley News Facebook group post.

The pole was down at the base with power lines crossing the freeway, according to CHP logs. The downed power lines caused a full freeway closure just after 5:10 p.m., while Southern California Edison (SCE) was called to the scene to repair the downed power pole.

The SCE has an estimated completion time of 10:50 p.m. All lanes in both directions have been reopened to traffic.