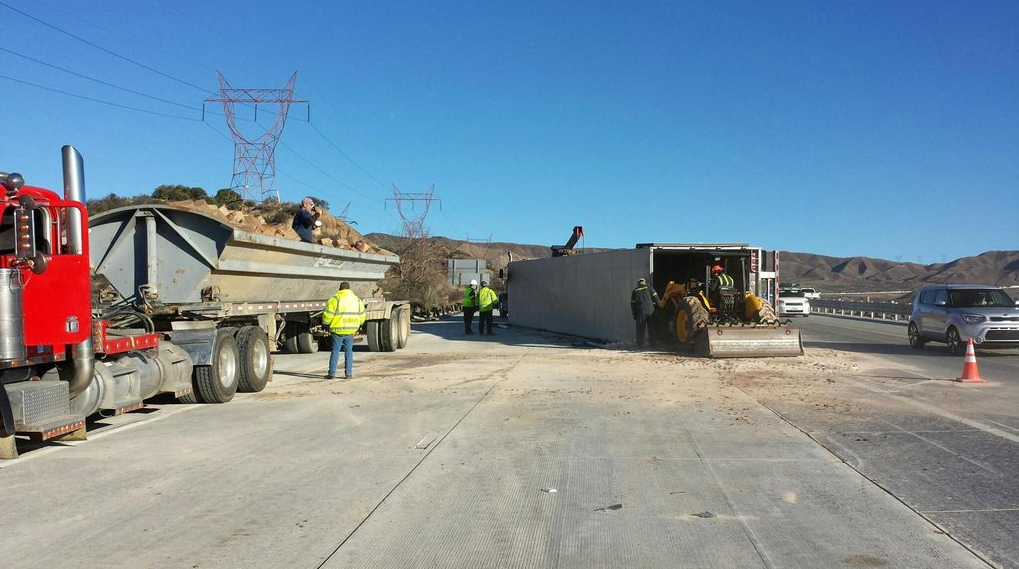 CAJON PASS-(VVNG.com):  Southbound I-15 drivers found it a challenge to drive even a couple miles once they approached the Ranchero road offramp early Monday morning. Two major collisions were the cause of  delays that caused some to just take the day off of work. The first was a tractor trailer crash with fire and the second was a fatality.

Just before 12:10 a.m. a red tractor-trailer carrying a load of soy milk was traveling southbound was sideswiped by another tractor-trailer causing it to overturn and catch fire on the I-15 South at SR-138. Per CHP incident logs the fire was close the gas tank of the vehicle causing increased urgency in getting the trapped driver out of the vehicle. The tractor trailer laid across all lanes, causing CHP officials to issue a SIG Alert at about 12:20 a.m.

Traffic was diverted off the Ranchero off-ramp and the southbound I-15 onramp at Oak Hill was shut down. Animal control was called to pick up the dog belonging to the truck driver. At 2:00 a.m. the Rancho closure was lifted opening the #1 lane to traffic. Per CHP incident logs the I-15 Southbound remains at only one lane open as of 9:00 a.m. Caltrans Officials said that the collisions created a 8 mile backup for southbound lanes.

Medical aid responded to the scene, and the man was transported to the hospital for treatment of undisclosed injuries.

Just before 4:20 a.m. witnesses reported seeing a body in the roadway on the I-15 southbound near Ranchero Road and Joshua Street. The CHP and San Bernardino County Fire Department responded to a pedestrian, identified as 41-year-old San Diego resident Rigoberto Mertado, who was found dead on arrival.

Mertado was walking along the center divider when reasons still under investigation, he went into lanes of traffic and was hit by a 2000 Ford Mustang driven by a 41-year-old Hesperia man. CHP officials said that the driver of the Mustang was driving approximately 65 miles per hour when the impact occurred.  Witnesses said that  Mertado suddenly left the center divider area and ran into the path of the driver that was in the #3 lane of traffic. The driver of the Mustang stopped at the scene to provide information to the CHP officers and was later released.

There were no other injuries reported as a result of the collision, a death investigation is currently underway and is being handled by the San Bernardino County Sheriff’s Coroner.

As of 1:00 p.m. traffic is still delayed and drivers should allow extra time to reach their destination. Victor Valley News Facebook group member Susan Whitney said, ” I’m at the top of the pass right now. Got onto the freeway at Ranchero road at 7:30 a.m. So it took 2 1/2 hours.” 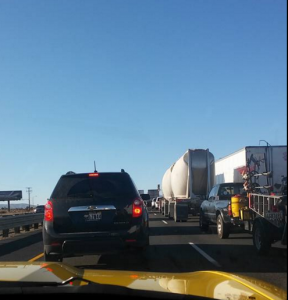 Southbound I-15 traffic at around 9:00 a.m. Monday, February 1st.(Photo By: Flora Roacho‎) 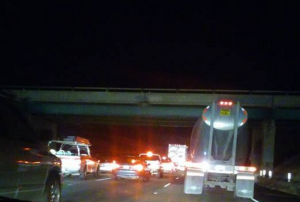