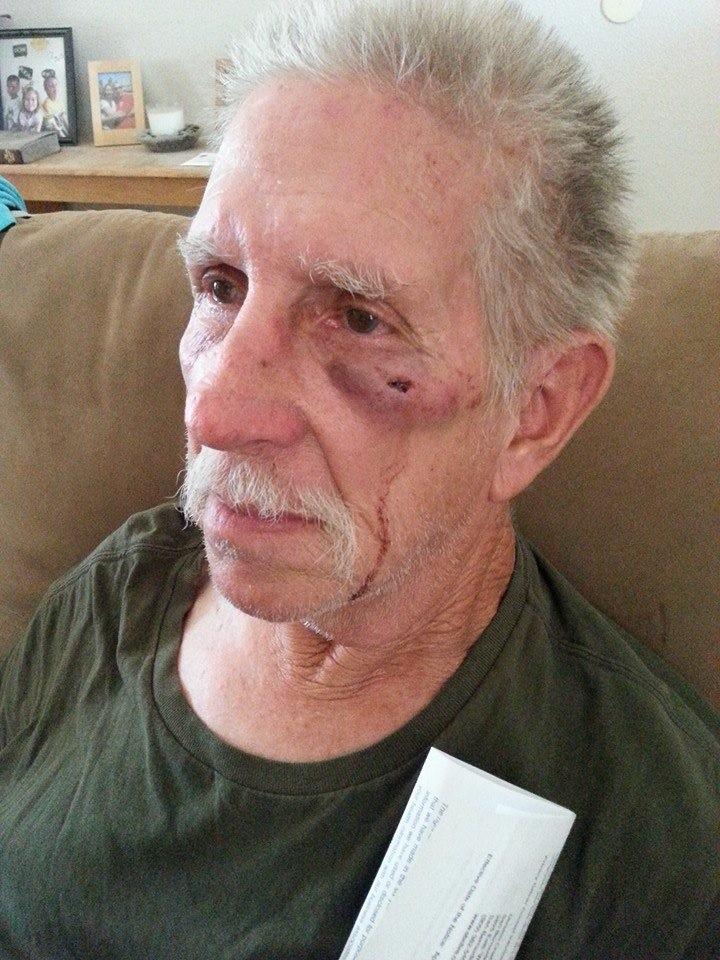 VICTORVILLE:(VVNG.com)- A 71-year-old man was confronted and attacked in front of his 9-year-old grandson by three women on Friday following a dispute about who should be pumping gas at which station. San Bernardino County Sheriff’s dispatch received a 911 at approximately 1:00 p.m., coming from the Arco gas station located at the corner of Hesperia Road and Nisqualli Road.

Danny Froscher, the elderly man who was attacked said the assault was a result of the women believing the gas pump he was parked at was their pump. Danny and his grandson Dakota were going to spend the day shopping when he decided to make a quick stop and fill up at a gas station. Upon pulling up to the gas pump with his grandson in the vehicle, a group of women began yelling for him to move his vehicle because they were going to park there. When Froscher refused to move the women walked up to his vehicle and continued shouting at the elderly man as he stood about 3-4 feet outside of his vehicle.

The confrontation progressed and one of the women ran inside of the gas station to put money on the same pump he was parked at. When she returned, she continued to confront Froscher and when he was only expecting continued verbal attacks she suckered punched him.

“I didn’t see it coming. She came right up to me and punched me right in the face. That’s when the other two jumped in and all three started hitting me, I fell back and tried to catch my balance. I remember putting my arms up in order to cover my face,” described Danny.

“They shoved my grandson into the pump and it kind of hurt his back, but it didn’t leave any bruises he was just a little sore.”

My great-grandson asked, “Why don’t you girls just go over to another pump? That’s when the pregnant girl said, “I don’t care if you are a little boy or who you are, you mess with me, I will knock you off that bar.”

The women continued to confront those in the area, including one man who was taking a cell phone video. At one point they even attempted to take the phones from bystanders. During the confrontation one of the women attempted to take Danny’s car keys from his hands; so she could reportedly move his vehicle.

The store owner broke up the fight shortly before law enforcement and medics arrived on the scene. According to Danny, the store owner came running out and jumped in the middle of the attack to prevent the women from attacking him. “If it wasn’t for him I might have been laying on that pavement beaten up pretty bad.”

“When the officer asked me if I wanted to file charges, I hesitated for just a second because I hate to see anybody go to jail. In my hesitation I thought if it wasn’t me, the way that they were acting they would be down the road getting somebody else.  So they need to be caught because they can’t just go out beating people up and having a bad attitude,” explained Danny.

The women were detained by police and the incident is under investigation. Two of the three women were arrested on suspicion of strong-arm robbery. The third, pregnant woman will also be charged but was not taken to jail. Froscher suffered only minor injuries, including a couple bumps on the back of his head, forehead and black eye due to the attack, no other injuries were reported as a result of this incident.