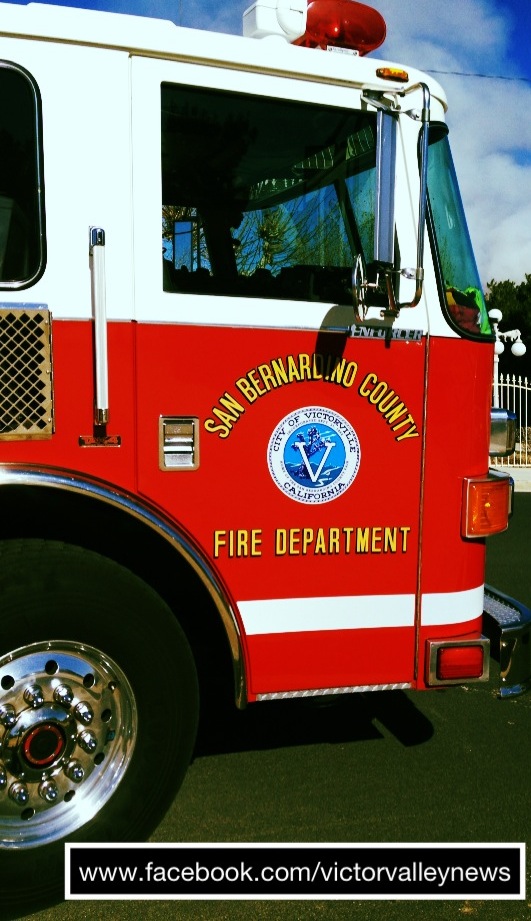 Incident: Residential Structure Fire 934AM San Bernardino County Fire Units responded to the first of three residential structure fires on the 13000 block of Luna Rd. at 9:34AM.

Neighbors’ reported smoke coming from and abandoned home and the first arriving unit found a single story residence with flames shooting out of a back window and heavy smoke pouring out of the second story windows. County Fire crews were able to knock down the flames in 8 minutes and prevent any major damage to the empty home.

The six Victorville fire units were joined by one Hesperia Fire unit responded. The majority of the damage was confined to the kitchen area with an estimated damage cost of $60,000 while saving the remaining structure valued at more than $175,000. There was no injuries reported and the Red Cross was not needed.

The cause of the blaze was determined to be Arson and is still under investigation by San Bernardino County Fire Investigators. 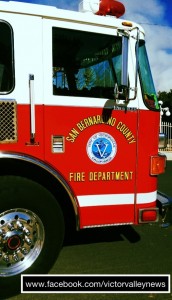 Incident: Residential Structure Fire 604PM San Bernardino County Fire crews quickly responded to a report of a structure fire in the area of Victoria Dr.. Upon arrival, fire crews found two large wood sheds on fire with strong winds pushing the flames toward homes next to the residence.

The vegetation near the sheds were engulfed with fire but were stopped before they advanced any closer. The quick work prevented the fire from spreading to neighboring homes and the main residence. The estimated damage is $15,000 and $110,000 was saved.

There were no injuries to report and the cause is still under investigation.

Incident: Residential Structure Fire 1022PM Yet another fire popped up in the Victor Valley keeping County Fire crews very busy all day Monday. A 911 call was received reporting a garage fire at a residence in Spring Valley Lake.

Upon arrival, fire crews found heavy fire was issuing from the Garage door area. Once again, the quick work of the fire crews knocked down the flames in 15 minutes with 14 firefighters and seven fire units. One unit from Hesperia assisted with the fire knockdown. There were no injuries to firefighters or civilians.

The residence had just started their dryer which was located in the garage and reported the fire a few minutes later. The blaze had destroyed the garage area along with burning its way into the home.

Quick work stopped the fire from devastating the rest of the residence, but did have extensive smoke damage Estimated loss is $55,000 and the value saved is $190,000. There were no injuries to report and the residence did not require the services of the Red Cross. The official cause of the Fire is still under investigation.

We wish to remind everyone that if you see any suspicious activity that may be related to the illegal act of arson, please call 800-47-ARSON to give anonymous information over the phone.