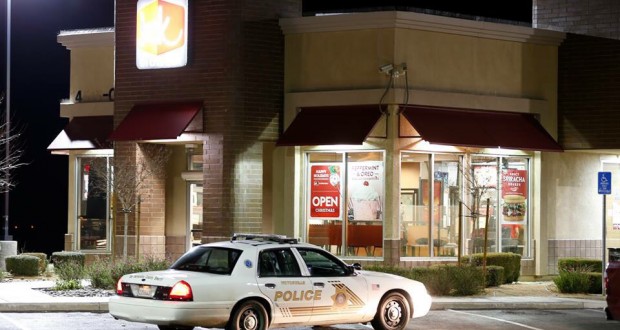 VICTORVILLE-(VVNG.com):  Three juveniles were sentenced on Monday for three armed robberies committed within a week in December 2014.

On December 20, 2014, at around 9:30 p.m. the three entered a Jack In the Box restaurant on Mojave and El Evado. They ordered employees to the floor and stole personal items and cash from the restaurant. The three fled from the scene and despite an area search, the suspects were not located.

One week later, on December 27th the three entered the Carl’s Jr. restaurant on Hook Boulevard and Amargosa Road. During this robbery, one of the suspects struck an employee in the head with a gun. The suspects fled in a white SUV and subsequently crashed the vehicle and fled the scene. Shortly after fleeing the scene, the three burglarized a home. The suspects again were able to elude capture.

Through investigation, all three burglaries were determined to be committed by the same suspects. Three juvenile males were identified as suspects and on December 30, 2014, evidence was located through a search warrant.

The three juveniles were sentenced to 3 years at the Department of Juvenile Justice to be transferred to an adult facility on their 18th birthday. The court also imposed 10 years stayed pending successful completion of parole. They were credited for just over a year and three months for time served, which includes conduct credit.