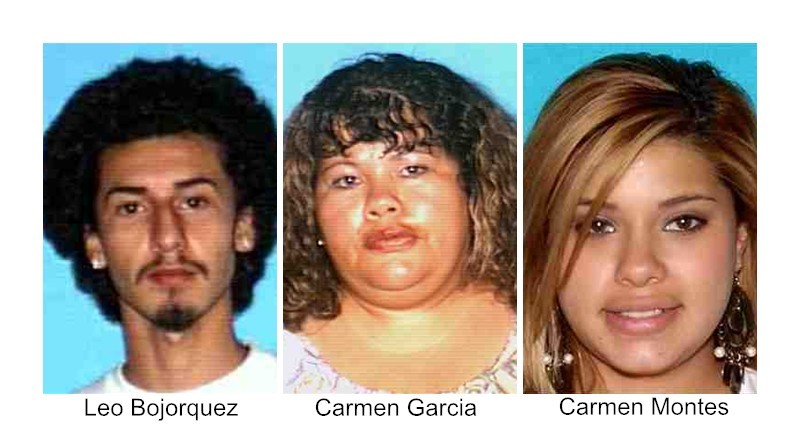 According to a news release, “On Monday July 1, 2013 at about 1002 hours deputies and detectives of the Hesperia Station served a search warrant at a residence in the 9000 block of Plum Court. On May 15, 2013 multiple victims reported to Deputy Joe Necochea that their checks had been stolen, forged and cashed by unknown suspects. In the course of his investigation, Deputy Necochea was able to identify suspects and secured a warrant for their residence. At the residence deputies and detectives located evidence implicating the suspects, Carmen Garcia, Carmen Montes and Leo Bojorquez. In an effort to reach additional victims, photos of the three suspects have been released to the media.

Carmen Montes was arrested and booked at the Victor Valley Jail for PC470, forgery; PC476, make fictitious checks; PC496(a)receiving stolen property; PC12022.1, commit felony while released on bail or own recognizance and is being held on $100, 000 bail.

Carmen Garcia was arrested and booked at the Victor Valley Jail for PC475(a), forgery, possession or receipt of items; PC476, make fictitious checks; PC487(a)grand theft and is being held on $50, 000 bail.

Leo Bojorquez is currently in custody at Glen Helen Rehabilitation Center for previous criminal offenses. He was booked for additional charges of PC475(a), forgery, possession or receipt of items; PC476, make fictitious checks; PC487(a)grand theft and is being held on $50, 000 bail and an outstanding $100,000 warrant out of Monterey Park.

Anyone with information regarding the suspects or related crime, is asked to please contact The Hesperia Station at 760-947-1500.

This investigation is an ongoing effort by the Hesperia Police Department to protect the communities it serves.

Citizens are encouraged to contact the Sheriff’s Department or WE-TIP INC(1-800-78-CRIME, www.wetip.com) to report suspicious or criminal activity and can remain anonymous.”

Two Arrested For Cruelty To A Child

2nd Hit-and-Run in Less Than A Week