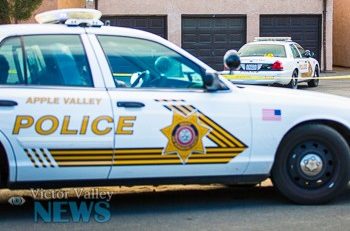 APPLE VALLEY-(VVNG.com): Three men were arrested in connection with the Sunday afternoon shooting that left a man and woman injured on the 17000 block of Quantico Road.  Just after noon the San Bernardino County Sheriff’s deputies from the Apple Valley Station responded to the report of a shooting with two victims injured.

According to San Bernardino County officials the victims had been in a dispute with 23-year-old Apple Valley resident, Michael Reynolds. The verbal altercation escalated and Reynolds pulled a gun and pointed it at the victims. The suspect’s father, 43-year-old  Adelanto resident, Joseph Davenport attempted to take the gun from Reynolds causing the gun to discharge, firing a single round that struck the two victims.

Reynolds fled the scene with 58-year-old Apple Valley resident, Arturo Garcia in a black Dodge Magnum. Both victims, were airlifted to trauma center for treatment of non-life-threatening injuries

Davenport remained at the scene and complied with the deputies request to call Garcia and Reynolds back to the scene. Three search warrants were served, two in Apple Valley and one in Adelanto. Reynolds was arrested for attempted murder and booked into the High Desert Detention Center. He is being held in lieu of $1,000,000 bail. Reynolds appeared in court via jail video on Tuesday, November 17th and denied all charges. He is due back in court for a pre-preliminary hearing on Wednesday, November 25th.

Garcia and Davenport were arrested for possession of marijuana for sale. Both were booked into the High Desert Detention Center and both were released on bail on Tuesday, November 17th at 5:08 a.m. There are currently no court dates set for Garcia and Davenport.

Anyone with information regarding this case is asked to contact Detective Naoum at the Apple Valley Police Station (760) 240-7400 or anonymous tips can be made to WE TIP at 1800-78-CRIME.