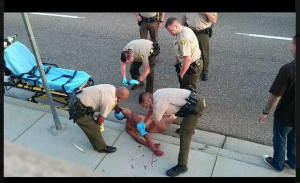 VICTORVILLE-(VVNG.com): Witnesses referred to him as the “bloody naked man”, but his mother and sister say he is just a troubled young man suffering from mental illness and a drug problem. Daniel Anglin, 19 faces five felony attempted carjacking charges, one felony burglary charge and one misdemeanor indecent exposure charge.

Anglin was captured on cell phone video at about 7:00 a.m., on September 28th near Seneca and El Evado roads walking around aimlessly. At one point in the video you can see bystanders stepping in to help a woman who was face to face and at times struggling to push Anglin away from her and her vehicle. A deputy was then captured driving up immediately using force in order to detain Anglin.

According to jail records, Anglin was arrested four days later on October 2nd at about 3:45 p.m. on the 2600 block of Arrowhead Avenue in San Bernardino. During his October 5th arraignment hearing via jail video, Anglin plead not guilty to all charges.

Anglin is now in custody at the West Valley Detention Center in Rancho Cucamonga and being held in lieu of $500,000 bail. He is due back at the Victorville Superior Court for a pre-preliminary hearing on October 14th.