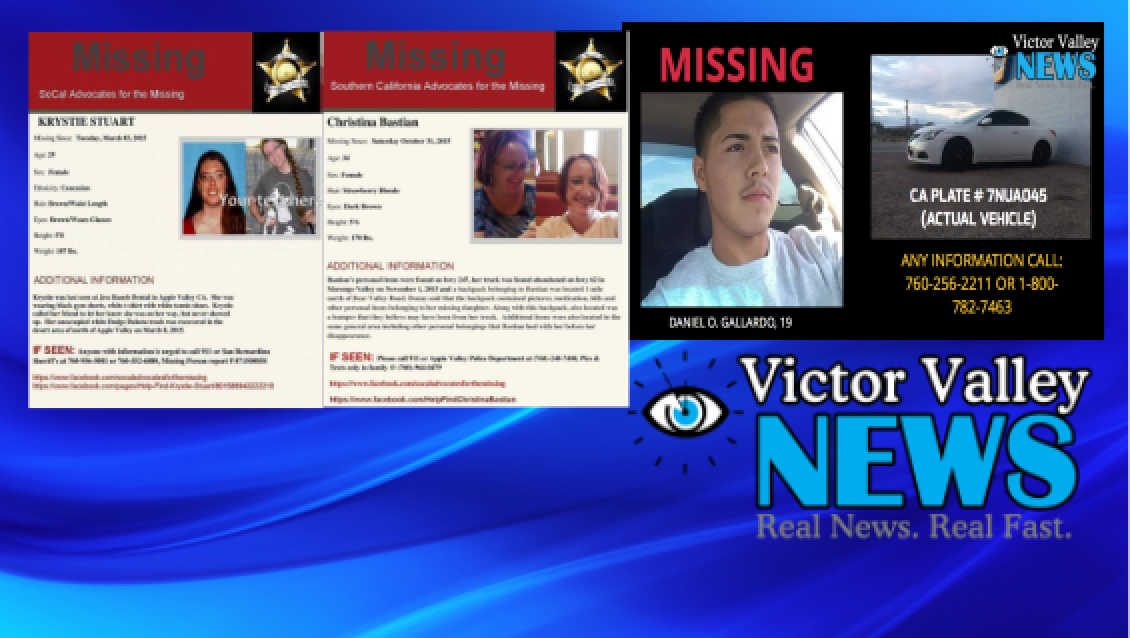 VICTOR VALLEY-(VVNG.com): Three High Desert families will be celebrating Thanksgiving Day with a piece of their family missing, one missing now for over nine months. Although media has followed up and tried to keep these people in the public eye as much as possible, as time goes by people tend to forget. With the missing piece of their heart, these three High Desert families will be longing for their loved ones until their safe return home.

On March 3rd, Lucerne Valley resident Krystie Stuart went missing and because of her age some believe that the prompt attention needed may not have immediately been put into her search. Krystie went missing after a dentist appointment at Jess Ranch Dental. The workers were the last to see Krystie and said that she left upset that she was unable to be seen that day and she lost her keys. She did leave using a spare key according to Jess Ranch Dental employees.

Krystie suffers from depression and was off of her medication, which lead to a decline in her mood prior to going missing. Five days later, on March 8th the white truck belonging to Krystie was located in the desert area of Apple Valley with some of her belongings inside.

Krystie is 5’8”, 107 pounds, she has very long light brown hair, her hair is usually braided and is longer than waist length. If anyone has any information about her whereabouts or has any information regarding her disappearance they are urged to call the San Bernardino County Sheriff’s Dispatch at (760)956-5001. If you would like to remain anonymous you can call in a tip to 858-212-7503 or you can email helpfindkrystiestuart@gmail.com.

Lucerne Valley Woman Missing for Over a Month

Lucerne Valley Mother Pleads for Information Regarding Her Daughter’s Disappearance

The second missing person is 19-year-old Daniel Gallardo from Barstow. Daniel went missing on Thursday, October 29th and the circumstances surrounding his disappearance are suspicious. According to authorities Daniel went to Reno, Nevada to meet with a family member. The following day the two went together for Daniel to seek employment in Truckee, Ca. Daniel was hired and expected to go to work the following day and did not show up. No one has heard from Daniel since.

The third missing woman, is Silverado High School teacher, 34-year-old Christina Bastain. Christina went missing on Sunday, November 1st after leaving her friends home at about 1:30 a.m. She left with her dog, Coco and several belongings that she was storing in her truck. Christina’s mother, Cheryl Denny said that her daughter suffers from Bipolar Disorder and with the help of her doctor was recently weaned off of medication. She is uncertain of what may have happened, but thinks her daughter may have had a breakdown after a recent attempted break in at her Apple Valley home.

The day following her disappearance, her vehicle and several of her belongings were located in two locations, her truck in Highway 62 in Morongo Valley and her belongings in the Lucerne Valley area. On November 11th a backpack with several more belongings were located in Apple Valley 1 mile north of Bear Valley and Central Road. Her tiny tan and white Maltipoo was yet another missing piece to the puzzle that family hoped would lead to Bastain. Although Coco, the missing teacher’s dog was found on November 1st, Denny was not made aware of the finding until Monday, November 23rd, when a friend located the found dog post on a local lost and found pet website.

Bastian is described as 5’6”, 170-180 pounds, she has brown eyes and strawberry blonde hair. The vehicle she was last seen driving was her Silver Dodge Ram 1500. Anyone with information on Bastian’s whereabouts or any information that may help locate her is asked to contact the Apple Valley Police Department at 760-240-7400.