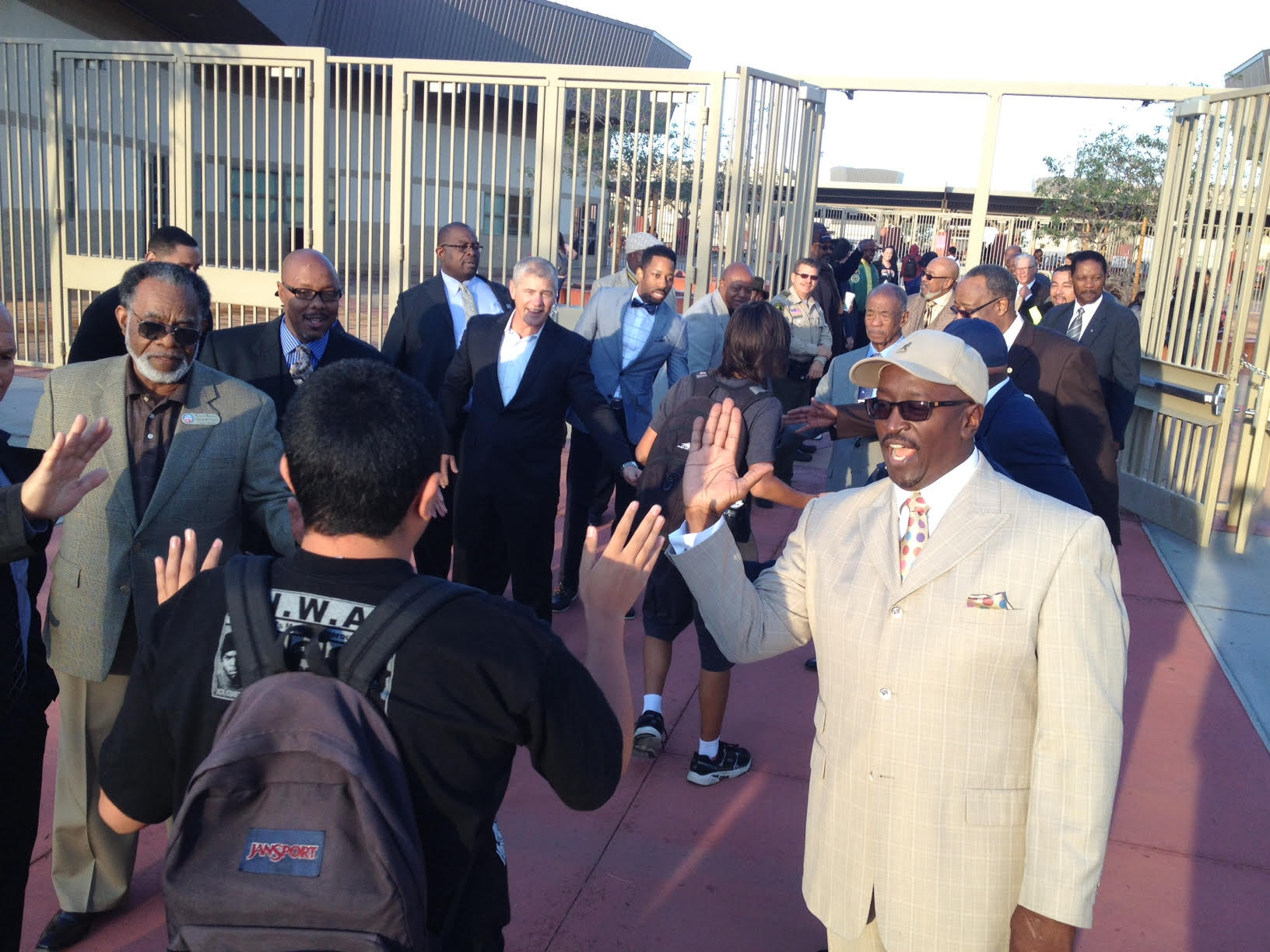 ADELANTO-(VVNG.com):  Smiles from ear to ear came to the faces of Adelanto students who were initially shocked from the presence of professionally dressed mob of me, fittingly called their visit “Men Mob”. According to the San Bernardino County press release more than three dozen men showed up to support the students at Adelanto High School Monday morning.

The group of men are formed of business leaders, pastors, government officials and more, all there speaking encouraging words and high-fiving the students. The man chanted, “Straight A’s, every day!” and “Way to go… Adelanto” and other phrases to uplift the spirits and support the young men and women.

Photo Courtesy of the County of San Bernardino

The group arrived at the school with a specific purpose, they went to encourage students to have a good day, to work hard and to be kind to each other. They also went in hopes that it would show the students that there are many people that care about their success. “The purpose is to bring the community together, specifically the men in the community, so that we can show up at these schools and show these kids that we support them, that we are here for them and there are some good men in these communities,” said Co-organizer Terrance Stone.

“The idea stemmed from an informal group called “The Fellas” who encouraged kids to study hard knowing that there are supporters rooting for them. “For some of these students, seeing you men standing here for them today is the closest they have come to having “father figures,”said Ebony Purcell, the Adelanto High School Principal.

Stone agreed, “I think it touches kids just from the standpoint that they can see us out there in the community, so that they can see good men in the community coming out so that positive role model,” said Stone, President and CEO of Young Visionaries, a nonprofit that works to transform lives and put kids on the right track in life. Supporters said that it is a good opportunity to see good local role models.

“It was amazing to see the change in the students as they initially tried to avoid  the line of men who were there to greet them from suspicious to a wide smile, bright eyes and a warm high-five or a generous handshake,” said Men Mob participant Ron Frame, a field representative for First District Supervisor Robert A. Lovingood. “The momentum seemed to build as the students watched others go through the line in front of them and receive nothing more than a warm greeting and a positive remark, all in all it was a refreshingly positive experience.”

Other participants included Adelanto City Councilman Charlie Glasper, Pastor David Denson and Victor Valley Union High School District Superintendent Ron Williams. Stone, whose organization has been seen on HBO, MSNBC, TBN and CBS, said civic groups and men’s organizations are encouraged to expand the effort. “You don’t have to wait for us,” Stone said. “If you want to do a “Man Mob” you can get some men together and contact the school, go out there and just support those kids.”

For more information, visit www.YVYLA-IE.org. On Facebook search “The Fellas.”