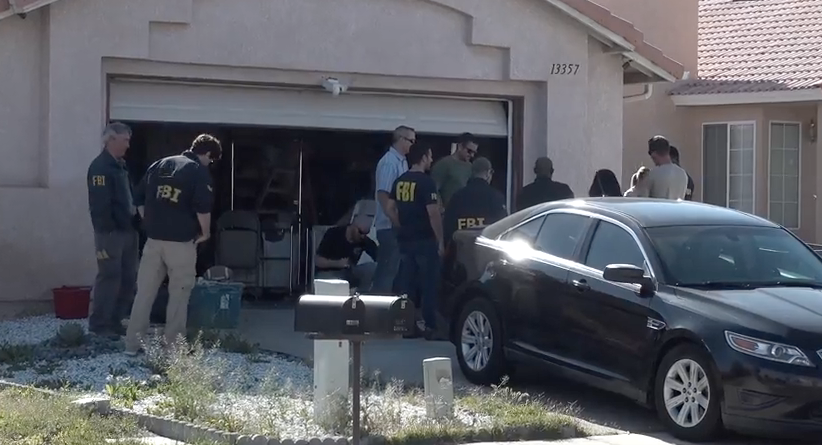 VICTORVILLE, Calif. (VVNG.com) — Victor Vasquez, 27, of Victorville was arrested as part of a nine-month investigation into drug and guns sales in Orange County, federal authorities said.

Anaheim police teamed up with the Bureau of Alcohol, Tobacco and Firearms, Santa Ana and the FBI Violent Gang Task Force in the gun and drug trafficking investigation, and as a result, seven people have been charged and an eighth suspect was arrested Thursday in Santa Ana.

According to the ATF, authorities served three search warrants in Victorville, one in Anaheim and two in Santa Ana on Thursday, April 26, 2018.

At about 7:00 am, residents in the 13300 block of Jenna Court were surprised after nearly a dozen FBI agents swarmed their typically quiet cul-de-sac neighborhood in Victorville.

Witnesses told Victor Valley News a man and a woman from inside the home were detained. The male was taken into custody, however, the female was released at the scene by officials. Neighbors said agents were seen carrying several large white boxes with what appeared to be guns.

During the nine-month investigation, authorities recovered 13 handguns, 13 rifles, eight shotguns, a hand grenade and about 4.43 pounds of methamphetamine in covert sales to a confidential informant, according to Anaheim Officer Bryan Devor’s affidavit in the charges against the defendants.

During Thursday’s sweep, police recovered an additional 13 firearms, hundreds of rounds of ammunition, thousands of dollars and methamphetamine and other drugs, the ATF reported.

One of the suspects offered to sell the informant a gun with a 100 round drum for $700, Devor reported. The informant was also offered a one-gram sample of methamphetamine, Devor said.