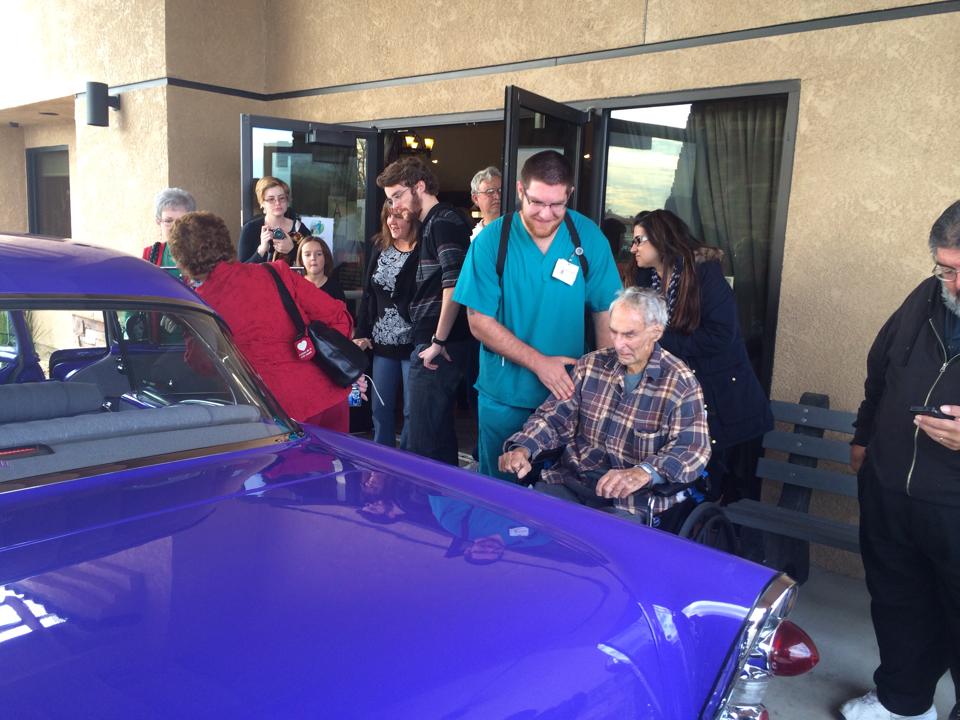 VICTORVILLE: It was a very special day for many Victor Valley residents who gathered to help honor a local mans wish. It all started when Juanita Weis, took to social media and posted a very unique and special request via Victor Valley News Group (VVNG) on Facebook.

Juanita, informed the group of over 25,000 members about a dear friend named Carl Johns,84, who is dealing with an advanced cancer diagnosis. Carl had a simple wish to go for a ride in a 56′ Chevy. The response from the public was overwhelming and Juanita quickly locked in the Chevy she was looking for in no time. In fact so many people responded and wanted to be a part of making this wish happen that the simple ride quickly evolved into a cruise down Historic route 66, with a couple of motorcycle escorts from the San Bernardino Sheriff’s Department.

On Wednesday, December 18, 2013 dozens of strangers and several community clubs gathered in the Molly Browns parking lot at around 1:30 p.m. near the intersection of Hesperia road and Green Tree blvd. Carl is a resident at Desert Knolls Convalescent, located just around the corner from the Molly Browns parking lot. At about 1:45 p.m. a group of people including Carls personal family headed to the facility ready to surprise Carl.

“When we went in, and before we could tell him completely what were there for, he (Carl) saw the car, a beautiful, purple, 56 Chevy Bel-Air, he called out, “Oh Look” and started to cry. We told him what was

happening and he was so overwhelmed, he just could not believe it, described Juanita. Carl was driven down to Molly Browns parking lot where at least 35 cars were waiting to cruise with him. Many community members waived and shouted, several children held signs all in support for Carl as he drove by waiving back and visibly touched, as tears streamed down his face.

“Our wonderful Sheriff’s traffic division was there to escort us out to National Trails HWY. Carl was in awe of the motorcycle officers and their cool flashing lights. And it was all for him. When we did the turn around to come back into town, he was finally able to see how many cars were cruising. “Speechless” is the word for his reaction, shared Juanita.

“Today was one of the best days of my life! I really enjoyed the opportunity to bless Carl Johns “on the cruise of a lifetime”. Most of you know that Carl does not have long before his home going, his last request was to ride in a 1956 Chevy Bel Air. Our community came out in a big way complete strangers. Carl was overwhelmed with emotion as we all were! Carl’s family was grateful to all of the wonderful well wishers!!! I would like to thank all the car clubs that came out. You all put on quite a show! The San Bernardino County Sheriffs Dept. Victorville station gave Carl the feeling that only the president knows with escorts and a parade!”

On behalf of Juanita, “I want to thank everyone who made this wonderful event happen. My great co-organizer, Kylleen Coogan who is an amazing “get it done” lady. Our Sheriff’s wife Shelly, who assisted us and who rode with us, Emil Aznar who owns that gorgeous Chevy Bel-Air, Shannon Deasey for setting that up, Our sign makers, Cruizin Buddies for their wonderful support, Over the Hill Gang, both Inland Empire and High Desert, Rare Vintage Air, Charismatics, Son’s of Soul, and the many individual drivers from the Victor Valley News Group, who responded from the postings on this site. Thank you Hugo Valdez and Jose Gonzales. You have all made a mans dream come true and brought blessings to his family. Merry Christmas to all of you. May God bless you for what you did today. I know I probably left someone out and for that I am sorry.”