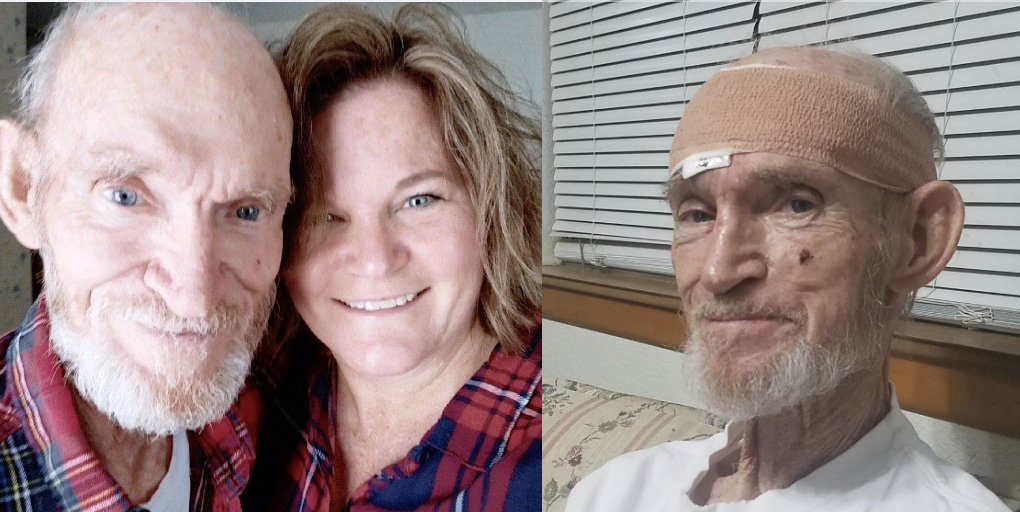 APPLE VALLEY, Calif. (VVNG.com) — An Apple Valley man named Ralph Dever is terminally ill but that’s not stopping him from enjoying every minute of his precious time left here on earth.

Surrounded by his daughter Denise Gleason and other family members, Ralph celebrated his 83rd birthday on August 23rd.

According to Denise, her father has pancreatic cancer and won’t take morphine because he refuses to sleep away his days.

“He is so weak and only weighs about 85 lbs, yet still wants to do things for himself,” stated Denise.

On October 8th Ralph asked his neighbor for a ride to Winco in Apple Valley so that he could grab a few things.

Denise said when it came time for her dad to pay, he had a hard time remembering the PIN # to his atm card.

“When he couldn’t recall his PIN, he left the groceries and started across the parking lot to the bank to get cash. That is much more walking than he’s been doing and he took a pretty good fall in the parking lot,” stated Denise.

Fortunately for Ralph, nothing was broken but he did get a pretty good gash on his forehead that warranted five stitches.

Denise posted about her father’s experience on the Victor Valley News Group on Facebook and shared how in the midst of all the commotion, a total stranger, not only paid for her dad’s groceries but also made sure they made it to his car.

“Hopefully, you will see this, and whoever you are, thank you so much. The Bible says there are angels among us, and I do believe my Dad experienced one today. May God Bless you,” said Denise.

Denise and her father would also like to say thank you to another kind man who stopped to block traffic and waited by her dad’s side until help arrived.

In an update, Denise said she’s absolutely overwhelmed by the response she’s received from her post and has cried many tears as she read through the comments.

“This post was not meant to highlight my Dad, but since so many have responded regarding his illness, I do want to say what a man of character and strength he is. If anyone were to deserve acts of kindness, it is my Dad as he has done so much for others throughout his life…although he would disagree in his humble way. As many of you have stated, I am currently cherishing every moment I have with him, reminding him every day how much I love him, and taking a lot of pictures. I encourage each and every one of you to do the same. Tomorrow is never promised for any of us.”

Her post has received nearly 6k likes and 500 comments.

Denise said her mom died 15 years ago and her dad has missed her so much over the years.

“Now that he knows the time that they will be reunited is getting closer, he speaks so much about her. He tells me a story about when they met and how they both had been through some rough times. He talks about how they saved each other’s lives and how she used to sing this song (“You’re the reason I’m living”) to him. He still plays it on an old 45. Such a wonderful love story they have shared.”