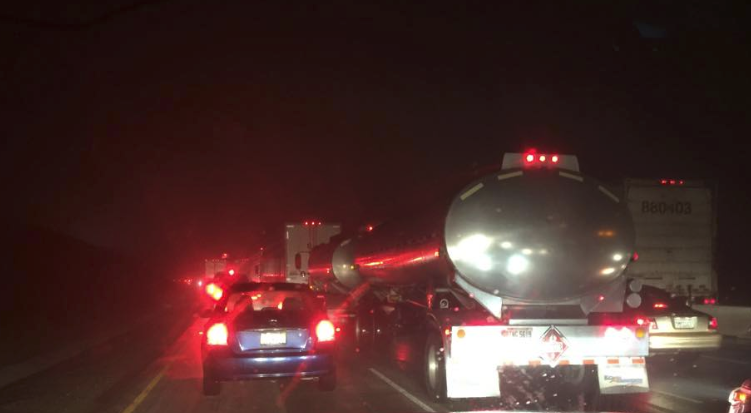 DEVORE-(VVNG.com): At approximately 11:29 p.m. on Wednesday, December 3rd a single-vehicle collision was reported along the 15 freeway. The red 1999 Acura Legend, driven by 18-year-old Jorge Rodriguez of Redlands was traveling southbound on the 15 freeway just north of Kenwood Avenue at an undetermined speed. For reasons unknown, but still under investigation, Rodriguez lost control of the Acura causing the vehicle to hit the center divider and overturn.

The vehicle came to a stop resting on it’s roof in the #1 (fast lane) of the 15 freeway south. Rodriguez and his 17-year-old passenger were able to exit the overturned vehicle. Just after the two were able to exit the vehicle, at approximately 11:38 p.m. Jaime Menzel, 60, of Apple Valley was traveling south on the 15 freeway. Menzel saw the overturned vehicle and proceeded to brake, but was unable to stop his silver 1999 Ford Windstar prior to striking the 17 year old. The Ford Windstar, driven by Menzel, first hit the 17 year old then struck the Acura pinning the minor under the Acura.

Emergency personnel arrived on scene to assist, but the 17-year-old was pronounced dead on arrival. Rodriguez was transported to Arrowhead Regional Medical Center with moderate injuries.

Alcohol or drugs are not suspected to be a factor in this collision. The reporting party, had reported that all three lanes were covered in mud due to the hillside where construction being done was sliding due to weather conditions. The name of the minor is being withheld. The collision is still currently under investigation.