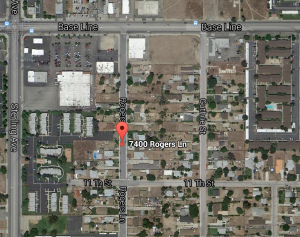 HIGHLAND: A teenage boy underwent surgery at a local hospital after being shot by a sheriff’s deputy in Highland Saturday night, authorities said.

According to a news release, on Saturday, January 18, 2014, at approximately 10:36 p.m., deputies from the Highland Police Department responded to the 7400 block of Rogers Lane, in Highland, following the report of a domestic disturbance.

The reporting party stated that a family member was armed with a weapon and the caller was in fear for their safety.

When deputies arrived at the residence, the suspect, a 16-year-old hispanic male was walking away from the location.

As deputies attempted to make contact with the suspect, he turned toward the deputies; armed with a hammer and a sharp instrument. The suspect attempted to attack a deputy; causing the deputy to fire his duty weapon, striking the suspect.

The suspect was transported to a local area hospital, where he is currently undergoing surgery.

No deputies were injured during the incident.

Investigators from the Sheriff’s Department Homicide Detail responded to the scene and are currently conducting the investigation.

Have Fun, Get Fit, Try Bicycling to Work!