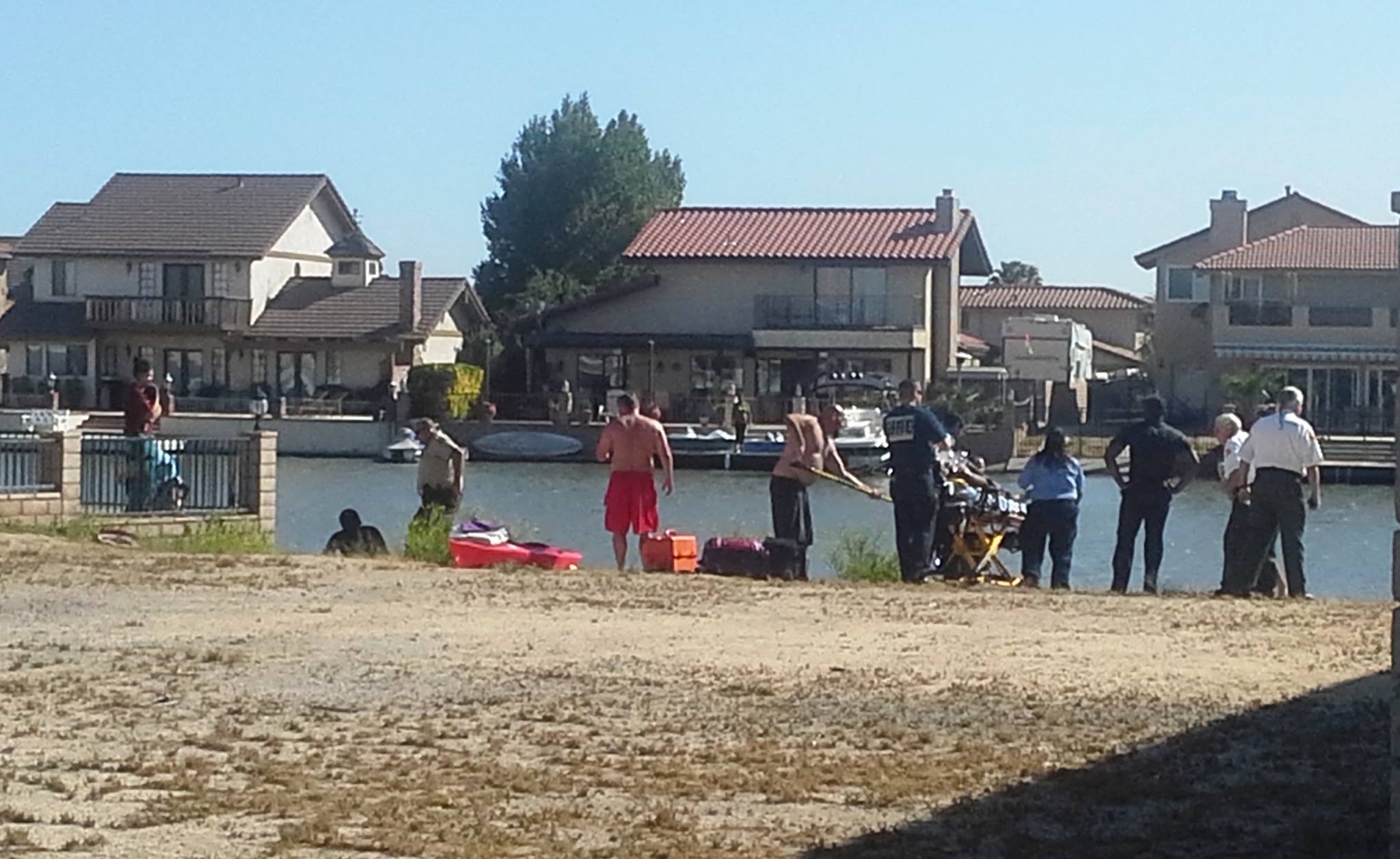 VICTORVILLE: (VVNG.com)-  On Tuesday at approximately 4:15 P.M., Sheriff’s dispatch received 911 calls regarding a person drowning on the 13000 block of Sea Gull Drive in the community of Spring Valley Lake.

Spring Valley Lake consists of 200-surface acres and almost seven miles of shoreline. The depth of the lake ranges from 9 feet to 22 feet.

Bystanders attempted to jump in and rescue the male, but kept getting pulled down by the victim and had no choice but to let go. He was said to be under water for approximately 8 minutes. A Dive Team and Swift Water was requested.

Unfortunately there was no time for a Dive Team or Swift Water Rescue to respond. The search and rescue was led by off duty fire captain Peter Lawson (resident of SVL) another resident named Robert, and SVL boat patrol team. SVL Public Safety Director Alfred Logan located the victims foot and pulled him up from the bottom while Pete Lawson and SVL public safety staff helped pulled him to shore.

I live 4 houses down. Kayla my daughter came running in the house and told me someone was drowning in the lake. I ran and jumped all the neighbors fences, jumped off the dock and swam as fast as I could to him. When I got to where I last saw him, bubbles came up right next to me so I dove down and pulled him up. I started to swim to shore with him and I could hear him breathing, I could hear water in his lungs gurgling. At this point he was unconscious then seconds later he regained consciousness and started to struggle and bringing me down. He kept pushing me under the water and I found my self fighting for my own life. I did not have any strength left to save him and I swam to shore. Help showed up and in approximately 8 – 10 minutes he was found and brought to shore. I did all I could for him and my heart is broke for his family

Fire was onsite and stood by to provide medical assistance once the victim was pulled out. They attempted to treat the teen at the scene before he was rushed by ambulance to Desert Valley Hospital where an air ambulance was requested but later cancelled. The teen unfortunately was pronounced deceased shortly after arriving to the hospital.

Family and friends have identified the drowning victim as 18-year-old Donaven Webb, a resident of Victorville. He leaves behind a 2-month-old daughter who was born on April 10th. According to what would now be known as his last FB update, Webb was very excited to visit his aunt and spend the day swimming in the lake.

According to a few facts from the CDC website:

Every day, about ten people die from unintentional drowning. Of these, two are children aged 14 or younger. Drowning ranks fifth among the leading causes of unintentional injury death in the United States.

More than 50% of drowning victims treated in emergency departments (EDs) require hospitalization or transfer for further care (compared with a hospitalization rate of about 6% for all unintentional injuries). These nonfatal drowning injuries can cause severe brain damage that may result in long-term disabilities such as memory problems, learning disabilities, and permanent loss of basic functioning (e.g., permanent vegetative state). Nearly 80% of people who die from drowning are male.

With temperatures heating up its very important to discuss these and other facts with children, family and friends.