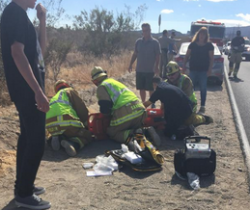 PHELAN – (VVNG.com)- At 12:10 p.m. on Saturday, October 25th, a 16-year-old boy was riding his bike with his friend when he was struck by a vehicle near Sheep Creek Road and Sunset Road in Phelan. When medical aid arrived shortly after the accident, the found the boy unconscious.

The boy, who was breathing was airlifted to Loma Linda Hospital in the city of Loma Linda for treatment. At this time, per family reports to the public, the family is at the hospital waiting to find out his condition.

The vehicle, that stopped at the scene had damage to the driver’s side windshield, but no injuries were reported by anyone in the vehicle.

More information will be updated as it is released.