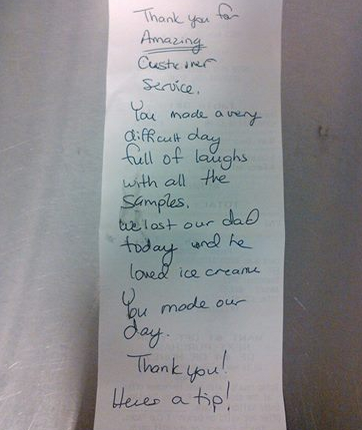 (VVNG.com)- We often hear things like, “the desert is getting bad”, “there is so much trash everywhere”, and “people can’t drive here”.  Victor Valley news would like to spotlight just a small amount of the positivity happening every single day in the Victor Valley area. It is about not only showing the positive, but being inspired to do what you can to make a difference or a change in the things that need changing.

A local man hesitantly reached out to the community through Victor Valley News, seemingly afraid of negativity or harsh words. In his post to the nearly 50,000 member group he showed embarrassment for having to ask for help obtaining the items that were required in order to start his new job.  Surprisingly to him, his request was welcomed with support and granted by many individuals within the community. Not only did he find all of what he needed to start his new job, he also got some offers of gas money as well as many well prayers and wishes. This was just one thing in the past week that showed that VVNG does care.

On October 19th, Victor Valley News member, 20-year-old, Evelyn Barajas, a Victor Valley College Student and  a worker at Baskin-Robbins in Hesperia was sharing a beautiful gesture showing the little things we do can make a big difference.  A family of five went in On Saturday, October 18th to get some ice cream from her workplace. The family joked with her as they asked to sample several flavors.  Barajas had a fun time and some laughs with the family. Upon leaving the family left a note thanking her for making their difficult day better, she never would have known what the family had been through prior to the note. “It is a beautiful feeling knowing that you can make a complete strangers day just by talking to them and smiling. Little did they know that they made my day as well “ said Barajas.

On October 19th, there was a post shared of a man who was noticed picking up trash tossed in a field.  The well-dressed man was stopped by Victor Valley News member, Elizabeth Matonic and her friend‎. “We helped him he was a very nice man and was picking up plates that someone threw out,” said Matonic.  Before the pair left they asked the man to take a picture of him doing a good deed that may not have otherwise received the notice it should have.

On the morning of October 20th, Hugo Valdez reposted a Victor Valley 411 post, posted by someone he did not even know. The single mother of four was being asked to remove two trees from her property by the city she lives in.  She mentioned not really having the financial or physical means to resolve the situation. The woman just happened to be  from a family that volunteers at community events for those in need and donates what they can when they can. Many stepped up offering to lend a hand.

Victor Valley News cares, we are not only a business, but a community and a huge team of  many individuals with many different things to offer.  So not matter how much you have or do not have, forget for a moment about what you can get and consider what you can give, even something as little as a smile, to make the community you live in a better place for us all.