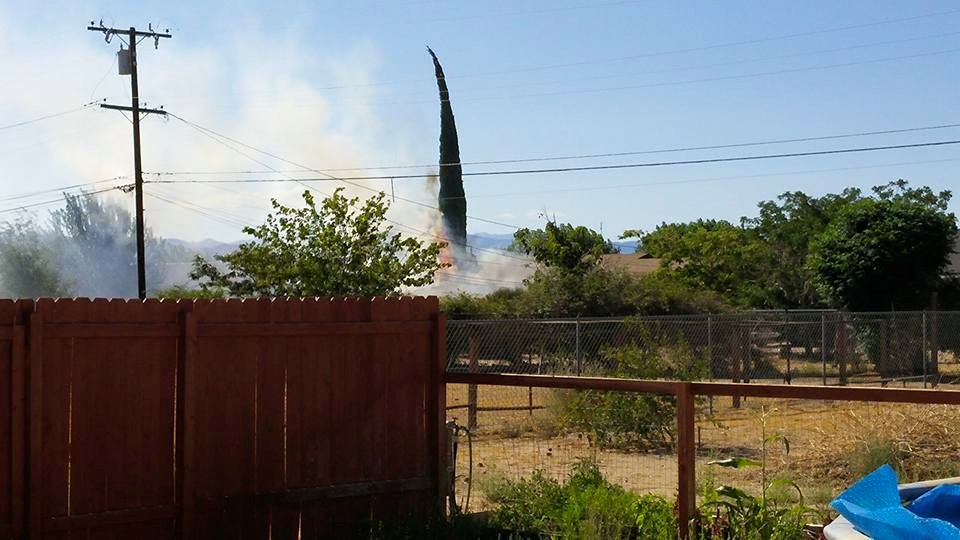 VICTORVILLE– (VVNG.com): An attempted marijuana oil extraction is believed to be the cause of a Friday morning explosion and fire. At about 9:15 a.m. dispatch received the report of a structure fire in the area of Luna and La Brisa Roads in the county area of Victorville. The reporting party, per scanner traffic reported that there was smoke and loud exploding sounds coming from the home.

The single story, single family home in the 15000 block of Luna Road was occupied by a tenant. Upon arrival firefighters determined that the moderate smoke was coming from the back patio area, and the attic. Two fire engines, a fire truck, a battalion chief and an investigator responded to the scene to first clear the home, which was determined to be free of occupants, then to extinguish the blaze.

According to witnesses, authorities were seen removing several small marijuana plants and other items from the home.
The fire was out by 9:34 a.m., the Sheriff’s Narcotics Division, utilities and building and safety were called out along with an investigator. The name and vehicle description of the occupant was collected from the owner of the home.

At this time, it is unclear if any arrests were made or the severity of the fire damage, but it is believed to have caused major damage to the back portion of the home. There were no injuries reported as a result of this incident.