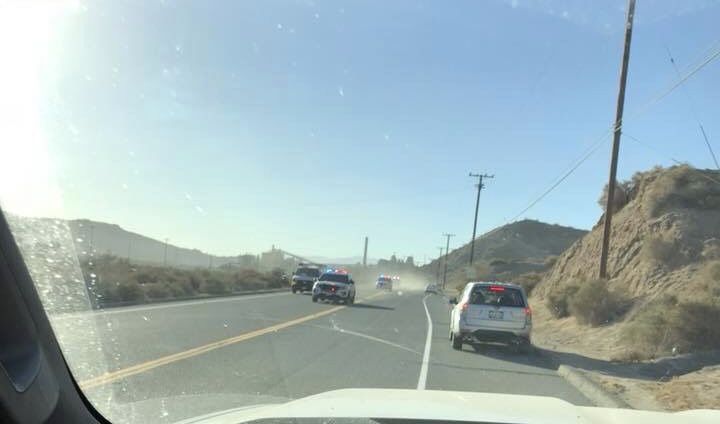 At about 7:30 am, deputies were dispatched to the 20400 block of National Trails Highway or more commonly known as Route 66.

According to initial witness reports, a Hispanic male adult armed with a large gun was seen standing near the roadway, north of the cement factory. Deputies also received calls regarding shots being fired in the area.

According to a Friday morning sheriffs news release, “an additional call was received by a victim who drove through the area, heard gunshots, but kept driving. When he got to work, he found a bullet hole in his vehicle.”

As deputies were responding, San Bernardino County Sheriff’s Department’s Aviation Division flew over the area and could see the suspect, identified as Jeremiah Torred, 25, of Helendale in the front yard of a residence loading a semi-automatic weapon.

“Torres, stood in the front yard holding a loaded AK47 over his head and pointing it in the air,” stated the release.

At 8:24am, with the assistance of a California Highway Patrol K-9, Torres was taken into custody and was found in possession of the AK-47 and a loaded 9mm handgun.

San Bernardino County Fire along with paramedics was requested to the scene for a dog bite. Per scanner traffic reports, the suspect was bitten by a CHP K9.

Authorities shut down National Trails Highway in both directions during the investigation and the roadway was reopened at about 9:20 a.m.

Anyone with information regarding this crime is urged to contact at Victor Valley Sheriff’s Station, (760) 552-6800. Persons wishing to remain anonymous can report information to WeTip by calling 1-800-78-CRIME, or by accessing the website at www.wetip.com.