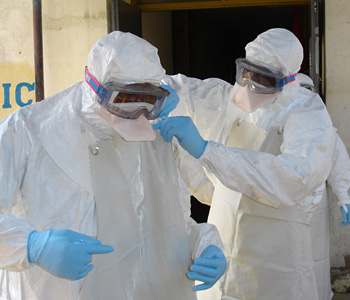 (VVNG.com)- Just days after the last U.S. patient known to have the Ebola virus, 33-year-old Dr. Craig Spencer was released for the Bellevue Hospital Center in Manhattan, a surgeon from Sierra Leone is on his way to the United States for treatment.

The short-lived victory and relief of being Ebola-free for the United States will now have to wait while Dr. Martin Salia, from Sierra Leone, but a permanent US resident is being treated. The Surgeon is due to arrive for treatment at Nebraska Medical Center on Saturday, November 15th. The surgeon’s wife, who lives in Maryland showed concern for her ill husband’s health while being transported.

This will be the tenth person treated for Ebola in the United States, eight now living Ebola-free and one that died of the virus. With over 5,000 dying from Ebola in West Africa, it is no wonder why many in the United States went into a period of panic when two nurses who treated an infected patient contracted the virus. It was later explained that the patient was misdiagnosed, delaying proper treatment for the patient and precautions for those treating the patient for several days.

The CDC believes that they are prepared to stop Ebola in it’s tracks here in the United States with their increased distribution of Personal Protective Equipment, Education, and identification of those who may have been in contact with those infected. They are taking aggressive measures to treat those infected while protecting the public from being infected with new travel and hospital required protocol.