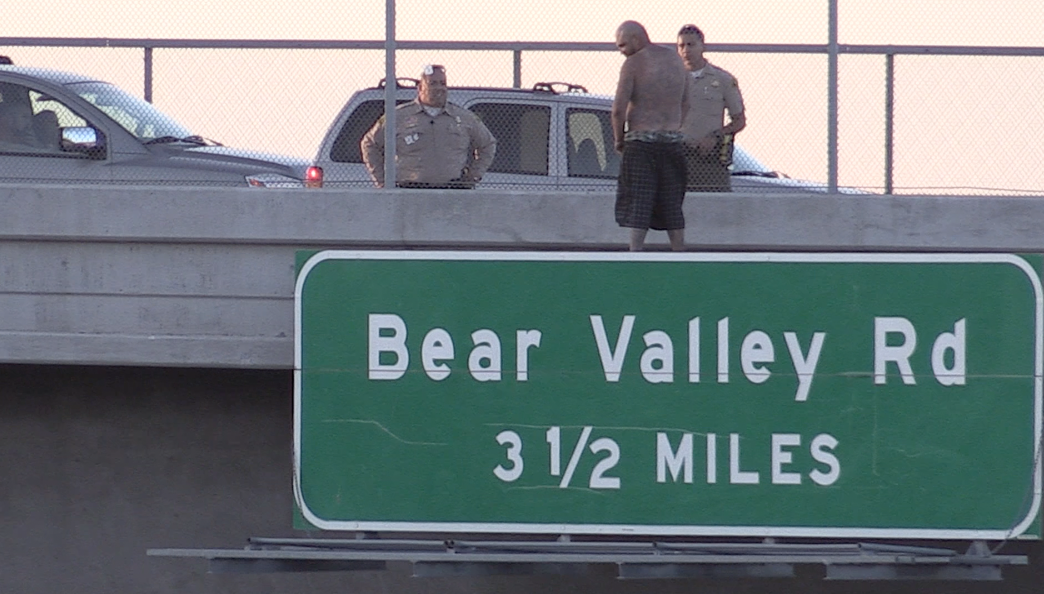 HESPERIA-(VVNG.com): Spectators crowded Mariposa Road seeking an outcome to a 27-year-old Hispanic Oak Hills man that was threatening to jump from the freeway overpass. For unknown reasons, the man climbed over the fence and stood on the Bear Valley Road sign on the overpass as the deputies tried to talk him down.

Onlookers holding signs and a cross showed up in support and to pray for the possible jumper. (photo by Gabriel Espinoza)

A Sigalert was issued on the northbound 15 freeway for over 3 hours following the incident that began just before 6:00 P.M. Northbound traffic was diverted at Main Street causing traffic to back up for many miles.

Airbags were deployed on the freeway below the man at approximately 8:50 P.M. The man, that per scanner traffic was under the influence of illicit drugs stood on the overpass area while deputies, along with his family tried to convince him to get down.

At approximately 9:40 P.M., authorities were able to get the man down safely by cutting a hole in the fence and pulling the man to safety. According to officials, two fire trucks were on the freeway below the overpass to assist in keeping the man from jumping.

“This was my nephew that had the freeway shut down. He had stopped by my house earlier and was very distraught. When he left my house I never expected him to do this so I apologize for everyone’s delay in their commute. He wouldn’t come down for his mom. So I had to think fast and  called his grandpa and he managed to talk him down,” said Cheryll Dougherty in a Victor Valley 411 post.

The freeway was opened to traffic minutes after the man was safely talked down.

Teen Girl Shot and Killed by Teen Boy in Victorville