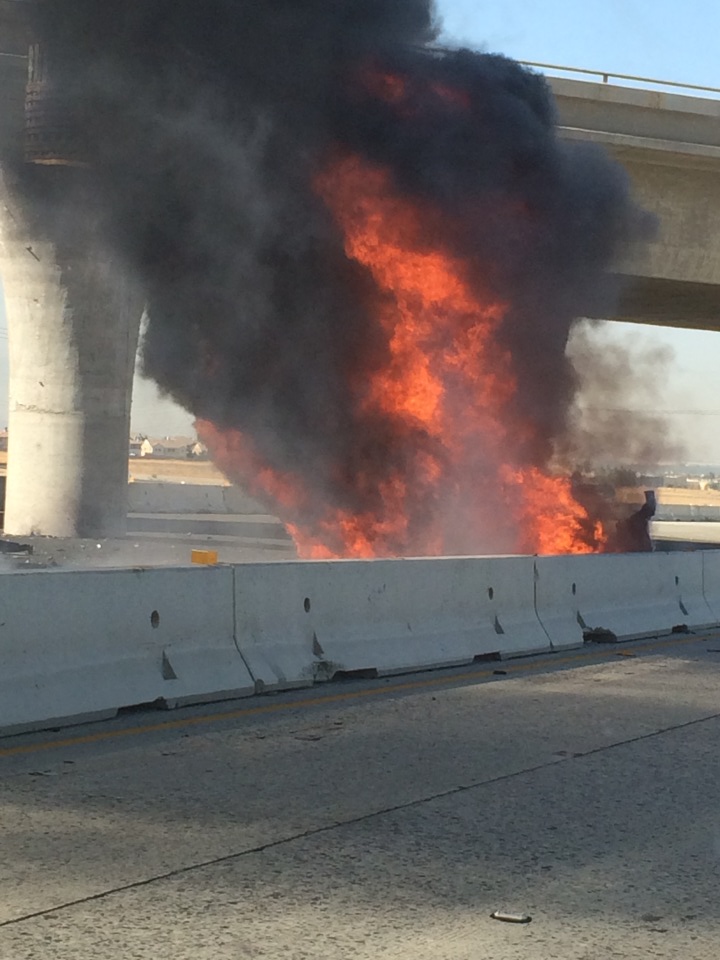 FONTANA:(VVNG.com)- Many commuters traveling along the 15 freeway witnessed a fatal accident that they will not soon forget.  On Wednesday at approximately 9:05 a.m., a 2010 grey Nissan Pathfinder merged at high speeds onto the 15 freeway at the Sierra Avenue on ramp heading southbound.

According to several eye witnesses at the scene, the driver cut off several drivers in his path shortly before colliding with the bridge pillar near Duncan Canyon road in Fontana. The impact caused the vehicle to fly into the air then crashed down exploding into flames. Debris from the engulfed vehicle scattered all around the flaming vehicle as shocked witnesses drove past the accident scene.

A witnessed reported, seeing the male driver of the SUV on his cell phone just moments before he crashed. The unidentified male was the sole occupant of the vehicle and pronounced dead at the scene. It appears that the cause of the crash was a planned suicide. Prior to the crash, the deceased male had been depressed and mentioned thoughts of harming himself, causing the Anaheim Police Department to issue a critical missing persons alert for the still unidentified male driver.

The identity of the driver has not yet been released. Once positive identification is completed, and the next of kin is notified, the name of the deceased driver will be released. The Fontana Police Department is investigating this incident.