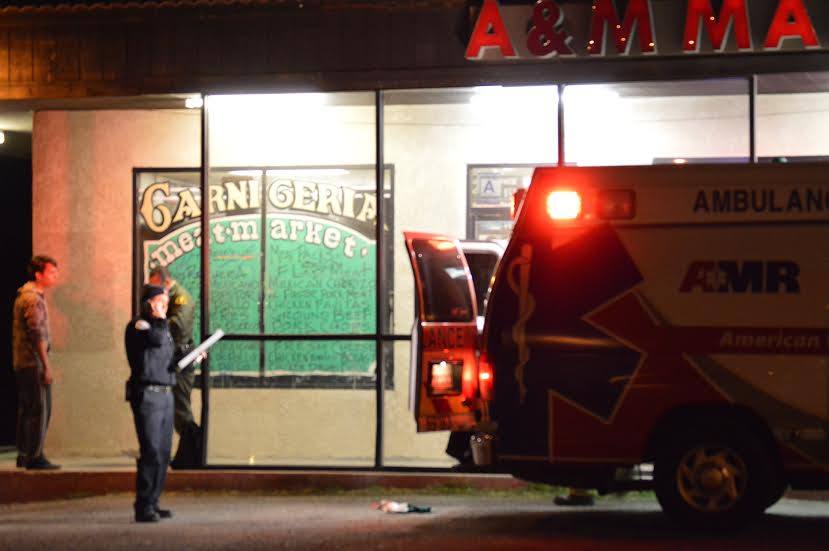 ADELANTO:(VVNG.com)- An employee at A & M Market & Liquor was assaulted and badly injured after an armed robbery. Sheriff’s Dispatch received the call reporting the robbery at approximately 9:26 PM on Monday, January 5, 2015 on the 11700 block of Bartlett Avenue in Adelanto.

According to scanner traffic, two males armed with hand guns entered the business and demanded several employees down to the floor. One suspect jumped over the counter and held a gun to an employees head before assaulting him. The employee was transported by ground ambulance to an out of area hospital. His injuries are currently unknown.

When the suspects entered the business they were both wearing black/white bandanas covering their faces.

Both suspects are described as black male adults in there early 20’s to late 30’s. One suspect is approximately 5’8″, with dark skin, brown eyes, thin build, possibly wearing white gloves and wearing a burgundy sweater. The second suspect was described as wearing jeans and a long sleeve hoodie.

Both suspects were last seen running on foot towards Hardy Avenue. As of 10:30 PM no arrest had been made.

More information will be posted as it becomes available. Anyone with information is urged to contact police at 760-241-2911.