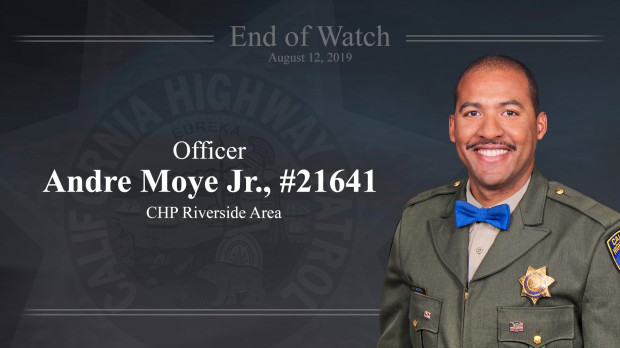 RIVERSIDE, Calif. (VVNG.com) — The California Highway Patrol announced funeral services for a motor-officer shot and killed in the line of duty in Riverside.

Memorial services for 34-year-old Andre Moye Jr. will be held at 10:00 am on Tuesday, August 20, 2019, at Harvest Christian Fellowship in Riverside. The public is invited to attend.

Officer Andre Moye Jr., was shot and killed during a gun battle with a suspect during what should have been a routine traffic stop.

On August 12, 2019 officer Moye Jr. conducted a traffic stop on a white pickup truck on the Eastridge Avenue overpass at the 215 Freeway in Riverside.

During the traffic stop, the suspect identified as Aaron Luther, 49, of Beaumont, produced a large rifle and shot the officer, severely injuring him.

At approximately 5:37 pm a call for immediate assistance for an “officer down” was requested by the CHP prompting multiple agencies to respond.

According to the release, “a backup CHP Officer, who was also on scene, immediately took gunfire from the suspect and returned fire. He called for assistance during the gunfight and was also struck, which caused a critical injury to one of his legs.”

Additional CHP Officers and RSD Deputies responded and also took gunfire from the suspect making it difficult to move the backup CHP officer from the line of fire.

Officials said the exchange of gunfire between the suspect and law enforcement continued for several minutes, resulting in a third CHP Officer being struck.

An RPD arrived the west of the suspect and exchanged gunfire with him. The suspect was severely injured causing him to stop his attack.

Officers rendered aid to the three CHP Officers who sustained gunshots, along with the suspect. Two of the injured Officers were transported by police vehicle to the Riverside University Health Systems (RUHS) trauma center.

Officer Moye Jr. was airlifted to the same hospital by RPD’s police helicopter. Life-saving measures were made by RUHS staff but unfortunately, Officer Moye Jr., a 4-year veteran assigned to the CHP – Riverside area station succumbed to his injuries and died in the line of duty.

The suspect was taken to RUHS where he succumbed to his injuries.

Officials said the weapon used was a semi-automatic rifle, and it was recovered at the scene on the suspect

Luther’s criminal history includes prior prison commitment for attempted murder and assault with a deadly weapon against a peace officer, along with other violent crimes.