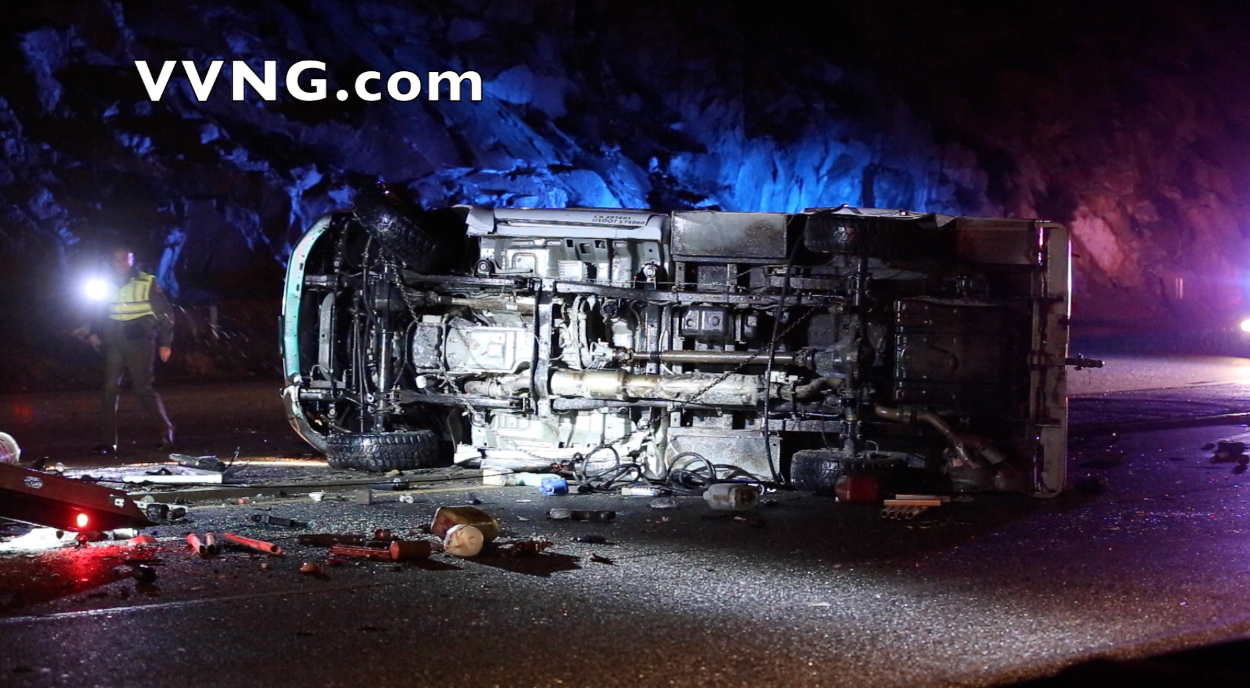 VICTORVILLE-(VVNG.com): On Tuesday, December 2nd just after 9:00 p.m. dispatch received a report of a single vehicle roll over in the area of Highway 18 and Stoddard Wells Road. The call came just minutes following a call to dispatch about a white work truck with a matching description driving recklessly.

Through the investigation it was determined the vehicle was traveling westbound on Highway 18 when the driver, who had been driving recklessly fishtailed causing the back of the vehicle to hit the guard rail. The pick-up truck, which was traveling at a high rate of speed, dramatically slowed down after hitting the guard rail and eventually flipped over with the wheels landing upward.

“Myself and another woman driving behind me stopped when we seen what happened. We called for the person inside and he answered. We asked if there was anyone else in the vehicle and he said there was not,” said witness Denise Diaz.

According to Diaz, both women proceeded to speak with the sole occupant inside the vehicle as they could see and smell the fuel spilling on the roadway. The injured man in the driver’s seat informed them he was unable to get out of his seatbelt so he handed them a pocket knife to help cut his seatbelt. The two women proceeded to pull him away from the vehicle and to the side of the road after using the pocket knife to cut the seat belt. “He was bleeding heavily from his head. His wife or girlfriend who arrived on-scene moments after the crash was punching him as we were dragging him to safety. I pushed her away from him and she punched me in the face,” added Diaz. The woman who was dressed in blue medical scrubs left in her blue Honda Civic as soon as first responders arrived.

The driver, identified as Jonathan Crockett, 44 from Victorville reportedly admitted to having as many as five drinks including a muscle enhancement drug known as GHB.  He was transported to St. Mary’s Hospital where he was treated and released with a citation due to his injuries. According to Victorville Sheriff’s Sgt. Ken Lutz, Crockett will be expected to appear in court on the date of the citation provided for the DUI traffic collision.

Westbound traffic on Highway 18 was closed and diverted to Stoddard Wells Road due to the wreck and debris in the roadway. Eastbound traffic was also temporarily closed for the clean up. Caltrans and Hazmat were called to the scene to clean up the fuel spill caused by the roll over. No other vehicles were involved in the collision.