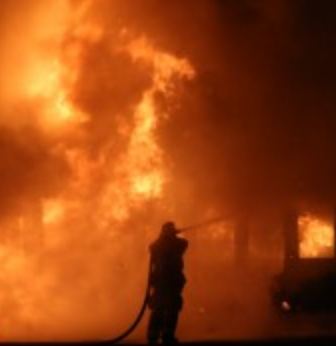 Two fires, in separate cities in the high desert, called in within seconds of each other caused tens of thousands of dollars overnight.  Although these fires required multiple units to fight the fires, San Bernardino County Fire Department is well staffed and maintained premier service to all the High Desert communities.

In the first incident, the San Bernardino County Communications Center received multiple calls of a vehicle on fire in the 16200 block of Cactus St in the City of Hesperia.  En route to the fire, the Communications Center received another call that two vehicles were now on fire.  As the engine company was arriving on scene they were notified by a San Bernardino County Sheriffs’ Deputy that the fire had spread to the inhabited structure and that all residents had self-evacuated. Due to the fire impinging on the structure a first alarm structure fire response was started which brought 2 additional engines, a truck company, a medic ambulance and a Battalion chief.

The swift actions of the initial engine company knocked the fire down, keeping the damage to the structure at a minimum. An electrical drop line from the street-side pole going to the residence was damaged and caused a power outage to several homes in the area.  Southern California Edison was on scene rapidly, assessed the damage and was able to restore power within 2 hours of the actual fire. The fire is under investigation by the San Bernardino County Fire Department who had two investigators on scene.  No injuries were reported in this fire to the occupants or firefighters and damaged was reported to be approximately $35,000 to the vehicles and structure.  The family was able to return to the structure due to the power being turned back on and the great knock down by firefighters preventing major structural damage to the home.

In the second incident, a call came into the Communications Center as the first fire was also being upgraded from a vehicle fire to a structure fire.  This fire was reported in an unoccupied commercial building in the 14100 block of Hesperia Rd in the City of Victorville.  This fire brought out a first alarm assignment as well to include 4 engine companies, a truck company, a Battalion chief and investigator. Upon arrival, the first due engine reported that smoke was coming from the rear of the boarded up building and the company advanced a hose line into the structure to find a room and its’ contents on fire.  The fire was extinguished quickly keeping the damage to approximately $10,000-$20,000 of the approximately valued $200,000 building.  Investigators on scene determined that the fire was started due a possible unattended warming fire being used inside the building which started other materials in the room on fire.

Safety Message:  With all of the fires attributed to chimneys as of late, the San Bernardino County Fire Department reminds the public that as the temperatures start to drop and you feel the need to start a fire in your fireplace you first should have it cleaned and inspected.  A certified chimney sweep can clean the inside of your fireplace taking away highly flammable creosote which has a tendency to start chimney fires.  They may also be able to check for cracks in your chimney which may lead to radiant heat escaping and allowing a fire to start in your attic.