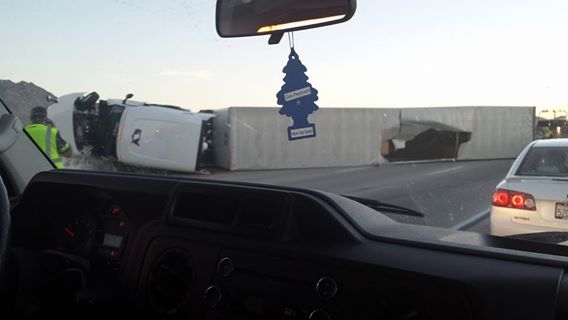 VICTORVILLE (VVNG.com) – On Monday Sept 1st, at approximately 4:50 a.m. a collision between a tractor-trailer and 2 passenger vehicles was reported on the 15 freeway south, just south of  the Stoddard Wells /Bell Mountain exit.

According to witnesses the tractor-trailer, that was transporting a vehicle, jack-knifed causing it to collide with vehicles on the north and southbound lanes of the freeway subsequently overturning.

“The semi went through the barricade into northbound traffic. Firefighters were working/cutting on the top of the semi cab. There was an SUV inside the semi with a broken windshield but not sure if involved or just being transported. That’s about all I could see passing by.” reported Luke Torres on a Victor Valley News post.

Emergency vehicles were dispatched to the scene of the accident as well as hazmat crews, due to an approximate 50 gallon fuel spill caused by the collision.

The cause of the collision is still under investigation. The condition of those injured is not available at this time. Information will be updated when it is received.

A sig alert was issued at 9:14 A.M with the #1 & 2 lanes  of the north bound lanes expected to be closed for an estimated 2 hours.