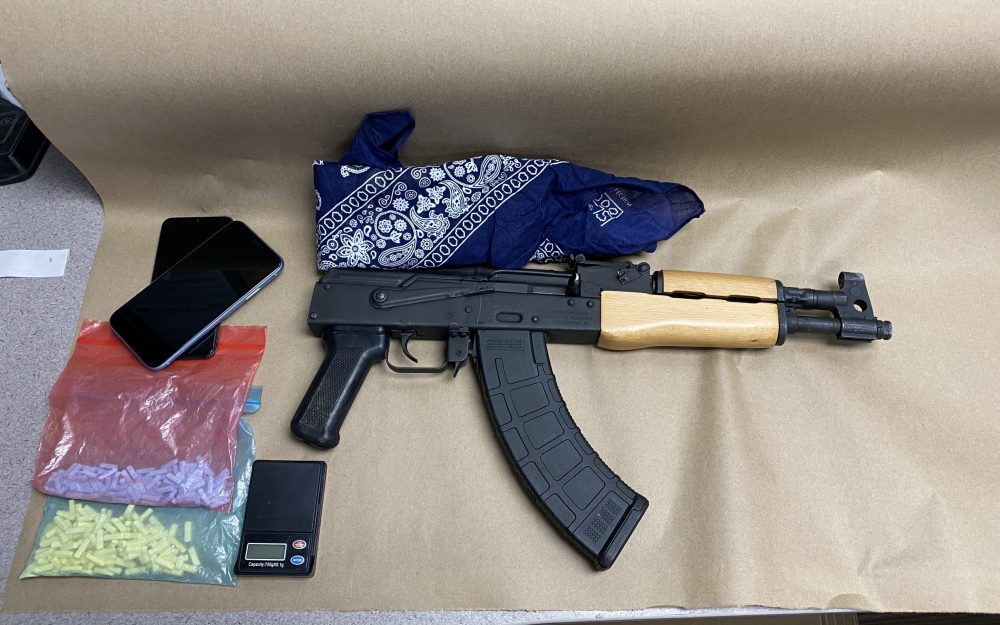 VICTORVILLE, Calif. VVNG.com) — Authorities are searching for two at large suspects who foot-bailed after a pursuit in old town Victorville Sunday.

On April 19, 2020, at about 1:00 pm, Deputy M. Collas and Deputy J. Arias, with the Victorville Police Department, conducted a traffic stop for a vehicle code violation.

According to a sheriff’s news release, the driver of the Volkswagen Jetta stopped near B and 4th Streets. “As the deputies approached the vehicle, one of the occupants fled on foot carrying a backpack, from which the barrel of a firearm could be seen protruding. The deputies pursued the suspect on foot, and the driver of the Volkswagen drove away from the location,” stated the release.

After a short chase, the deputies were able to catch one of the suspects on foot, later identified as 21-year-old Geoffrey Chenevert, a resident of Victorville.

“The backpack was recovered, and inside deputies found a short barrel AK-47, loaded with a high capacity magazine. The Volkswagen was located a short time later, abandoned by the driver and second passenger. Inside the car, deputies found a large number of Xanax bars and a digital scale,” stated the release.

Chenevert was arrested and booked at High Desert Detention Center for possession of a controlled substance for sale, carrying a loaded firearm under suspicious circumstances, possession of a short barrel gun, and possession of a large-capacity magazine.

Sheriff’s officials confirmed the driver and the second passenger are still at-large, and deputies are investigating leads to locate them. No further information is being released about the outstanding subjects at this time.

Anyone with information about this investigation is asked to call the Victorville Police Department at (760) 241-2911 or Sheriff’s Dispatch at (760) 956-5001. Callers wishing to remain anonymous are urged to call the We-Tip Hotline at 1-800-78CRIME (27463), or you may leave the information on the We-Tip website at www.wetip.com.