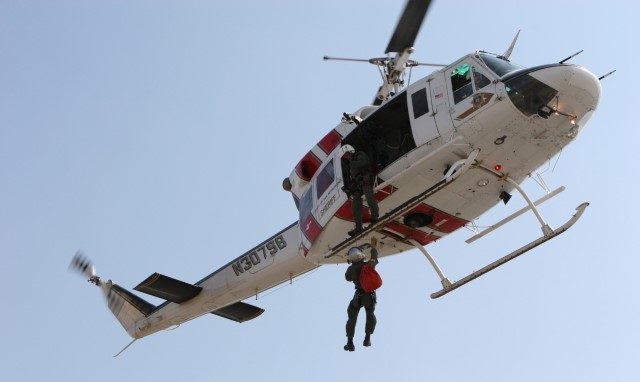 DEEP CREEK – A Hesperia woman was hoisted to safety after injuring herself at the Deep Creek riverbed on Monday, July 25th.

At about 2:39 p.m. Air Rescue 306 responded to the Deep Creek riverbed regarding an injured female. Due to the rough terrain the woman, later identified as 32-year-old Elizabeth Heaton would need to be hoisted out.

“Pilot Corporal Mike Gilley flew the rescue helicopter into the canyon area and hovered over the victim’s location,” authorities said.

A Bauman Screamer Suit was placed on Heaton and she was extracted up and into the helicopter. Air Medic/RN Melanie Munns was then hoisted up from the scene.

Heaton was transported to San Bernardino County Fire medical personnel who were waiting at the top of the Deep Creek Spillway, then transported by ground ambulance to Desert Valley Hospital with nonlife-threatening injuries.