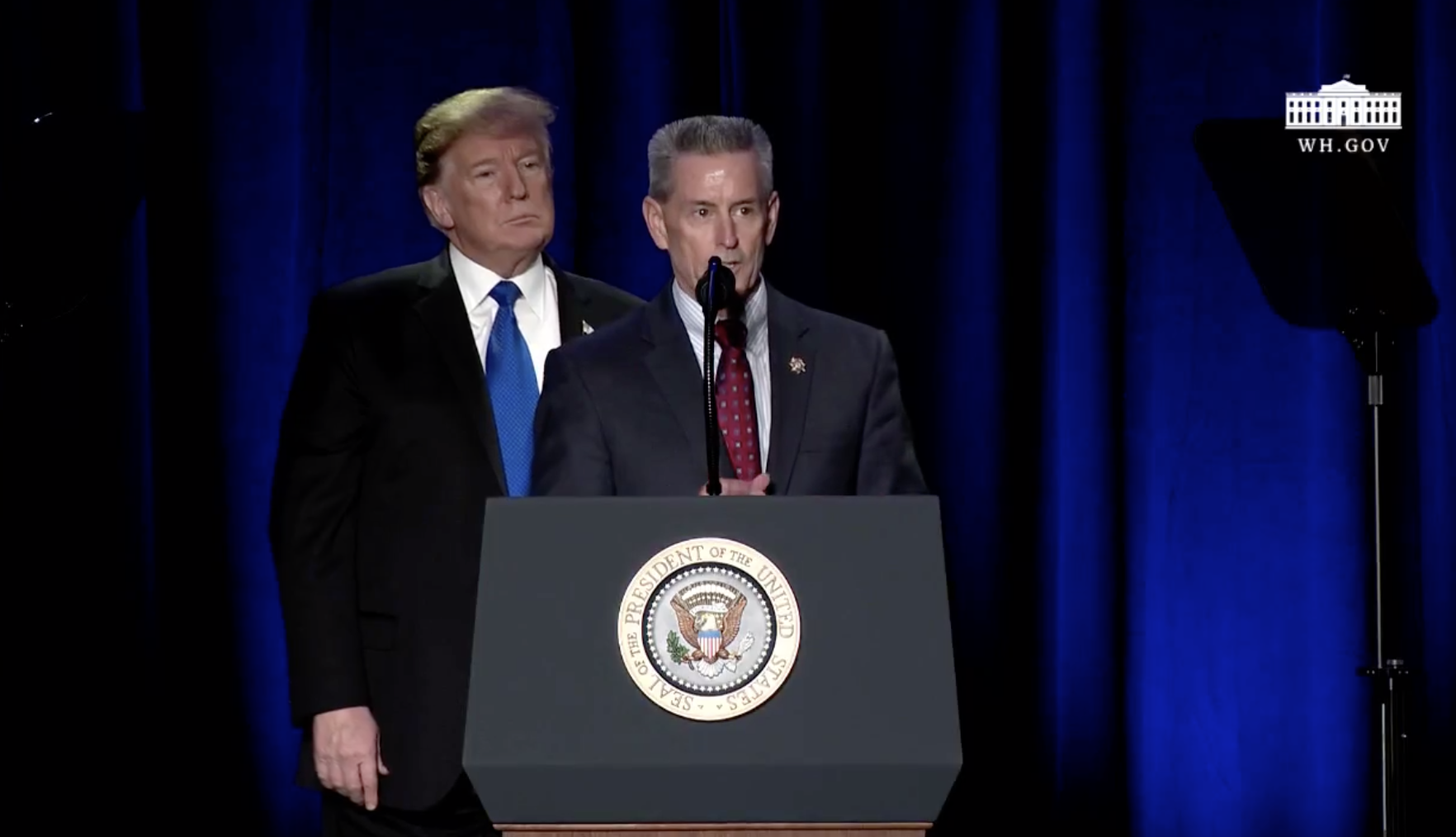 “During remarks by President Trump, Sheriff McMahon was unexpectedly called to the stage where he exhibited his true leadership qualities by praising the “true heroes”, the men and women who wear the uniform and protect and serve the community. We are proud!” Stated Sheriff’s Spokeswoman Cindy Bachman.

President Trump introduced McMahon to the conference attendees and said, “Ever since he was a young boy, John wanted to follow his great-grandfather’s footsteps of becoming a law enforcement officer. In 1985 he started out as a patrol deputy, today John is the Sheriff of San Bernardino County.”

President Trump went on to discuss the “dark day” in December of 2015 when terrorist opened fire at the Inland Regional Center in San Bernardino, injuring 22 and killing 14.

“I’ve spoken about that often. These were people that worked in the office with other people. They thought they were all friends. But one day, they came in shooting. Incredible,” stated President Trump. “Immediately, John worked with the local police chief to respond. Their brave officers chased down the terrorist and brought their sinister rampage to a rapid end.”

President Trump personally invited McMahon up to the stage and said, “I don’t know if we can get you past Secret Service but were gonna try, right? Come on!”

Sheriff McMahon was greeted by the President of the United States with a handshake and then was offered the mic.

“Thank you so much for your kind words, Mr. President.  And I will tell you, your support for law enforcement is incredible, and we all in this room thank you for what you’ve done for us.

The relationships we have with our federal law enforcement partners are absolutely incredible.  Better than they’ve been in my 34-year career.

But I think the true heroes — and we have to remember this — are the men and women who we all get to work with each day that put on the uniform and go do the job of protecting and serving all of the communities responsible for.  Thank you so much, Mr. President,” stated McMahon.

The President returned to the podium and thanked McMahon for speaking, despite McMahon being caught off guard.

“He did a good job.  He didn’t know he was going to do that.  It’s always dangerous to have somebody come up and speak.  You never know.  It can be very dangerous.  Thank you very much, John.  Great job.  We’re very proud of you,” stated the President.

Sheriff McMahon has over 33-years of law enforcement experience, beginning his career in 1985, as a patrol deputy at the Needles Station.

He has been promoted to every rank in the department and has worked at 15 stations throughout his career.

The voters elected Sheriff McMahon to his first term in June of 2014.

“We are extremely proud that Sheriff John McMahon was recognized for his leadership on a national level. Our department members and county residents are very fortunate to have the greatest sheriff,” stated San Bernardino County Sheriff’s Spokeswoman Cindy Bachman.

We are extremely proud that Sheriff John McMahon was recognized for his leadership on a national level. Our department members and county residents are very fortunate to have the greatest sheriff! pic.twitter.com/5oq3sK0TU9

Today, it was my great honor to address the @MjrCitiesChiefs Association and @MCSheriffs Conference in Washington, D.C. We will never forget your service, and we will never, ever let you down! We love you, and we thank God for you each and every day. https://t.co/9tuNcVcBqe