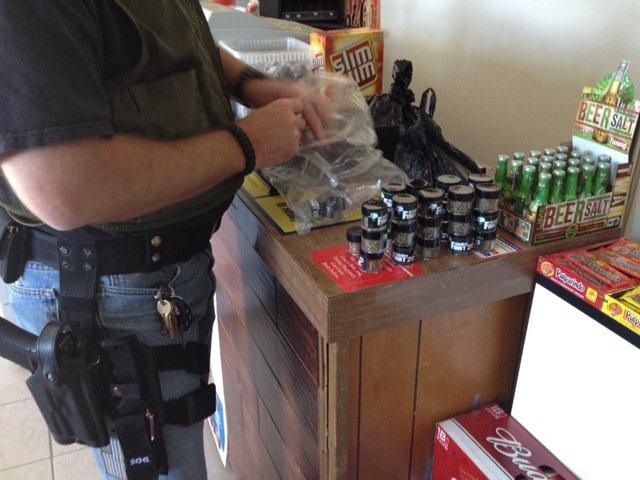 Sheriff John McMahon will present a Synthetic Drug ordinance to the Board of Supervisors that includes criminal, administrative and civil penalties for those who sell Synthetic Drugs – more commonly known as “spice” or “bath salts” – in the county. Spice is a mixture of herbs sprayed with the synthetic chemicals that is usually smoked. Bath salts are synthetic chemicals in a powder or crystal form that are usually snorted or injected. These highly addictive, synthetic drugs are marketed as potpourri, decorative sand, shoe deodorizers or glass cleaner; however they have nothing in common with the products they are advertised to be. They are packaged using bright colors and cartoon characters in an obvious ploy to attract children.

The ordinance targets synthetic drugs beyond the traditional realm of lab testing and further allows for enforcement based on the marketing, price, sales location, warning labels and similarity to street drugs. For example, synthetic drugs are often labeled as “window cleaner” but are sold in a smoke shop; do not resemble traditional window cleaning products; cost significantly more for a small portion of product; and are labeled with “not for purchase by minors.” The proposed ordinance finds a combination of the above-listed facts evidence the product is illicit. Furthermore, the ordinance creates penalties that include fines, misdemeanor charges and the possible loss of a business license.

“Spice” and “bath salts” – also known as “designer drugs” – have been scientifically formulated to create the same effects of more common drugs, such as marijuana, methamphetamine or PCP. But these “fake” substances are not detected on standard drug tests and are often misconstrued as “harmless” because they are a synthetic imitation. For this reason, abuse tends to run rampant among children and those who are subject to standard drug tests, such as military personnel.

The effects of these synthetic, or “designer” drugs, range greatly because there is no prescribed dosage on any of the packages. Users have been known to suffer cardiac arrest, brain seizures and tremors. Others have extraordinary strength, similar to the effects associated with the use of PCP, making the Taser and other force options ineffective. While producers of bath salts promise a euphoric high, similar to cocaine or methamphetamine, the psychotic results of the synthetic drugs are far more severe and addictive.

Because of the serious physical ailments and dangers to the public’s health, this ordinance finds the sale of synthetic drugs to be a “public nuisance.” Synthetic drugs are considered a “grave or imminent danger to the public at large” and may be subject to abatement procedures authorized by county codes.

The Sheriff’s Department worked closely with various residents involved in local coalitions throughout the County who are concerned about the covert effect synthetic drugs have had on their community. These dedicated community members have been a driving force in garnering awareness of this problem and opening law enforcement’s eyes to the extent of possible sales in the county, said Sheriff John McMahon.

“These drugs are affecting two segments of the population that deserve the most protection: our children and the brave men and women who serve in our country’s armed forces,” McMahon said.

12 healthy foods for around $2